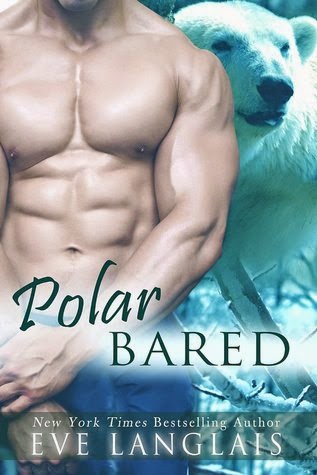 Well what can I say, but I love the tales Eve Langlais Writes.
This new sifter series is absolutely thrilling, hot and sexy.
I have read many sifter stories, and her unique take on it is refreshing.
I love this community she has created for them to live  in, were they all get along.
From polar bears to foxes. This has to be the most interesting
read I have had in a long time. When I picked up the first book in the series, I new
I had something very  Amazing in my hands. I was completely transported through the book,
I truly felt like I was right there in Kodiak Point. The books in the series are Phenomenal,
and the stories get better and better as she gose along. I don't know how she dose it,
but hope she never stops. I can not wait for her next tail form the Willey  bunch of shifters.

What's a bear to do when a human has a polar-izing effect?

When Vicky accidentally slides into the side of a polar bear,
she doesn't expect to fall in love. Eaten yes, perhaps used as a chew toy,
but become the object of a bear's affection and lust?

Crazy! Almost as crazy as the fact the polar bear turns out to be a man.
A sexy man. A man who growls,
and roars and does everything he can to chase her away.

Only to come back.

Gene only has one thing on his mind, vengeance,
until Vicky crashes into his life.

Poor Gene. After the pain and betrayal he suffered in the war all he
wants is revenge against the brothers who left him behind.
But he's confused when instead of wanting to punish
him for his evil acts, they offer him forgiveness.

As if that weren't annoying enough, the cutest geek he ever met--with
caramel kissed skin and wearing the sexiest dark rimmed glasses--won't
leave him alone. Or more like, he can't seem to stop following her.

And it isn't just because someone is out to hurt her.

He wants her. But does he want her more than vengeance?

Welcome to Kodiak Point where the wildlife might wear clothes,
but animal instinct rules the heart.

Two sets of eyes turned her way, and Vicky clamped her lips tight, suddenly wishing she’d kept quiet.
“Who is she, really?” Brody asked. “Don’t tell me Ghost has finally settled down?”
“As if,” Gene snorted. “She’s just someone I came across who can’t seem to stay out of trouble.”
Gee, what a warm and fuzzy way of describing their strange relationship. “I’m not doing it on purpose,”
she mumbled.
“Yet, that hasn’t stopped shit from happening to you and around you,” Gene rebuked, but not with his usual
acerbic tone. “Say hello to Vicky. I met her while she was investigating polar bears in the Arctic Circle.”

Brody barked a laugh. “So she kn—”
Gene cut him off. “Knows they are awesome creatures.”
“Majestic,” she corrected, only to blush as Brody fell against the wall laughing so hard.
“Oh, this is fucking priceless,” Brody managed to gasp. “Majestic.” This sent him into another gale of
laughter while Gene glared.

“I don’t see the humor. Polar bears are brave and noble creatures. Much better than say a mangy wolf.” It
was Gene’s turn to smile as Brody sobered and glared back.

“You wish.”
“I know.”
Vicky wished she could understand the serious miens over which animal was better. She tried to alleviate the
tense situation, which, despite the tenseness and the volatile size of the men facing off, for some reason didn’t
send her into a panic. Despite the testosterone heavy in the air, though, she didn’t worry. These men weren’t
the type to bring her harm.

More and more, she couldn’t help but see the difference in how a man could treat her and how much her
father and Rick differed—not in a good way. “The polar bears weren’t the only incredible thing out there.
Gene was probably the most important person I met. He saved me.”
Gene shook his head no and made throat cutting gestures.
Catching the motion, Brody stepped in front of Gene and smoothly said, “Really, how? Tell me more?”
“He’s saved me quite a few times since we’ve met. First from the bear and then the poisoned coffee that
almost had me freeze to death. Then there were the guys who tried to kill me by making it look like I got
attacked by a bear. The bear was the first one to actually save me there, but Gene arrived shortly after.”

“And was he by any chance naked?” Brody asked.
A frown creased her forehead. “Yes, how did you know?”
A smile split Brody’s lips. “Old Ghost here never did like getting his clothes dirty during battle. And is that all
that’s happened?”
Having sidestepped Brody to take a sentinel position by the window, Vicky couldn’t help but note Gene’s
resigned expression as Vicky extolled his virtues. “Well, after he found some new clothes, we ended up
escaping the camp before the other bad guys could get us. But they started shooting at us. Gene took care of them when they chased us down on snowmobiles, and Gene singlehandedly saved both our lives. Gene’s a
hero,” she finished with a pleased smile in Gene’s direction.

Oddly enough, his shoulders were hunched, his head was down, and he shook. Overcome with the trouble
she’d caused no doubt.

Turning back to Brody, Vicky couldn’t help but note his wide eyes, eyes that got wider the more Vicky
rambled on about Gene’s general awesome nature.
His incredulity when he snickered, “Ghost, a hero?” was totally uncalled for.
“He is,” she insisted, indignant enough to plant her hands on her hips and tilt her chin.
“Are you fucking kidding me?” Brody asked, not of her but Gene.
“I wish. Trust me, I’ve tried to dissuade her from this foolish fantasy that I’m a decent person, but for some
reason, Pima here just won’t believe it.”

“Because I didn’t imagine it. You saved me, which makes you a hero.”
“You know, I bet you could carry off those tights. You’ve got good legs,” Brody mused aloud.
“Sounds great especially since I could use them to garrote you,” Gene threatened.

Hello, my name is Eve Langlais
and I am an International Bestselling author who loves to write hot romance
J.  I should warn you, I have a twisted imagination and a sarcastic sense of
humor and am known for making readers giggle with my stories.

Do you love shapeshifters? I do, especially strong alpha males, the kind who
take charge and aren’t afraid to get furry and kick ass for the one they want.

I am also extremely partial to aliens, the kind who like to abduct humans
and then drive them insane...with pleasure.

Or do you like something a little darker, more serious?
Then check out my cyborgs whose battle with humanity
have captivated readers worldwide.

If you'd like to know more, read some excerpts or find out what I’m working
on, then please visit me at http://www.EveLanglais.com
or sign up for my newsletter at  http://www.evelanglais.com/newrelease .
I am also extremely active on Facebook: https://www.facebook.com/eve.langlais.98

FB for parties so I can participate:  https://www.facebook.com/evel.minion