Out of this World #2

Princess Perripraxis not only has to find a fiancé—and
fast—she’s got to find one who doesn’t mind that her “no
makeup” face has green and purple scales. Otherwise,
Daddy Dearest has plans that don’t include Perri’s
compliance. Candidate Number One: Her sexy human
best friend, Brandt.

Bartender Brandt Turner didn’t need all those years in the
army to teach him never to leave a man behind. Or an alien
princess in need of a pretend fiancé. If she needs someone
to play the lovesick fool to convince her dad to let her stay
on Earth, well then, he’ll let the world think
Cupid finally took him out.

But Perri’s father has no intention of playing nice—and he’s
not above cruel and unusual alien torture to make things go
his way. But Brandt is willing to complete the
mission…however far he has to go.

Oh. My. Freaking God!!! What a great book it so elegantly written
and what a truly unique romance. This book was an absolute treat
to read. It is book two in the series and I have to go read book one
now. And so ready to see what she writes next.

This book is about Brandt and Perri. Brandt is an ex military man
and human. Now when I say that as Perri is an alien, but she is not
just any alien. She is a princess but most importantly she is Brandt
friend. But her father is a real piece of (well I cannot say what  he
really is unless I want my review removed.) But trust me when you
read this book no matter how bad a dad you had. He is nothing
compared to the complete (bleep bleep) her dad is. He wants to
make her marry this alien just to save his hide. And she has to
convince him she has a man. So she runs to her friend for help.
Now they just need to convince him he is the right choice for Perri.
But I will tell you she has an unusual diet and when you find out
you'll laugh and omg the dinner with her dad was just so much fun.
I was Laughing my butt off at some of it and angry at others.

He lifted his head slightly and nudged hers back with his cheek, intending to kiss her forehead. To be tender. To be a friend.

But her lips were there and they looked like strawberries against her green skin and he knew even as her eyes widened and connected with his that this was a bad idea.

He brought his lips down on top of hers and he found that he didn’t care. Didn’t care that she was the princess
of a galactic empire. That his best friend was in love with her sister. That she was green. That they were friends. That he’d promised himself he wasn’t going to get involved with someone he actually cared about.

Didn’t even care that the taste of her lips against his made him feel like he was falling off a cliff and into a serious pile of shit.

They both shifted, moving so they were facing, and he brought his hands up to cradle her face with his left while he wrapped his right around her waist, hoisting her off her own stool and into his lap.

She had her fingers entwined in his hair and was kissing him like he was her only source of air.

The tip of her tongue licked against his mouth, and he began to kiss back, chasing her into her own mouth. He
tightened his grip on her, pressing their chests together, and he fought the urge to shift his hips into her, to maneuver them onto the top of his bar.

They were friends and they’d had too much to drink and she was upset and this was the last thing either of them needed.

She grabbed the front of his shirt right above the top button and jerked downward, ripping the shirt apart and sending buttons flying.

Right, then. He kept a tight grip on her hips so she didn’t fall off his lap and brought his other hand down to start fumbling with the knot that held her sheet-toga-ceremonial robe thing closed.

She let go of his shirt and started squirming, pulling the hem up, refusing to let go of his lips, and he tried his best to help her get the thing off over her head.

“Wait.” He broke his lips away from hers and wrapped his arms around her waist, hoisting her up as he stood and dropped her onto the bar, pulling the material off over her head, trying not to drool because how had he not realized that she’d been going commando under that sheet?

“Brandt.” She grabbed the sides of his dress shirt and pulled him close again, pressing their lips together, and
suddenly his sweet little Perri had gotten forceful. “Didn’t you just tell me I’d been on Earth six months and I needed to go ahead and have sex already?”

“Well.” He wasn’t sure what to say. He’d been with a lot of women who liked it a lot of different ways. But he’d never been quite as turned on as he was right this very second with the little woman in front of him handling him like a rag doll.

“And that it should be with someone who didn’t freak out when they found out I was green?”

“Uh-huh?” He studied her, some weird mixture of turned on and really fucking intimidated.

“That leaves three possibilities. Anderson Fox is not interested in having sex with a female. Mattias is in love
with my sister. And then there’s you. Ding ding ding, Brandt Turner, you are a winner. Now take me upstairs and take my earth virginity already.”

“Um…” he muttered once before she managed to press their lips together again, and all he could think was, “Sure.

Okay. Best to give the lady what she wants.”

And to think, he’d thought she was the mild-mannered alien princess in the lot. 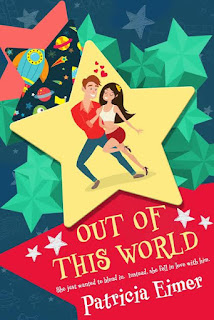 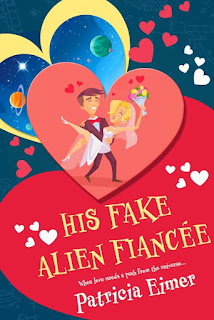 His Fake Alien Fiancée (Out of this World, #2)

Patricia Eimer is a suburban mom who has days where she
feels like she’s barely hanging on. She currently lives in
eastern Pennsylvania with her two wonderful kids and a
husband that learned the gourmet art of frozen pizzas to give
her more time to write. When she’s not writing—or shuttling
her children to a hundred different places a day– she can be
found trying to cook (and sometimes blowing up hard boiled
eggs), reading and arguing with her dogs about plot points.
Most days the Beagle wins but the Dalmatian is in close
second and her mastiff puppy is making a break for the
inside. Patricia meanwhile is a longshot fourth.

When she’s not writing she can be found on Facebook, at
her website (www.patriciaeimer.com) or blogging about her
attempts at cooking and her complete inability to craft as
a contributor to the Suburban Flail Blog
(www.suburbanflail.com). She is also a connoisseur
of really bad science jokes.