led by four sexy brothers, each guaranteed to steal your
heart and set it racing!

All four books in the series are out now, meaning it’s
complete and ready for a good binge-read!

Who doesn’t love a series binge-read? Every book has a
happily forever after and there are no

cliff-hangers, because there’s nothing worse than a cliff-hanger!
Check out the book, download it with your Kindle Unlimited
subscription if you have one, and be

sure to enter the awesome grand giveaway happening at her website! 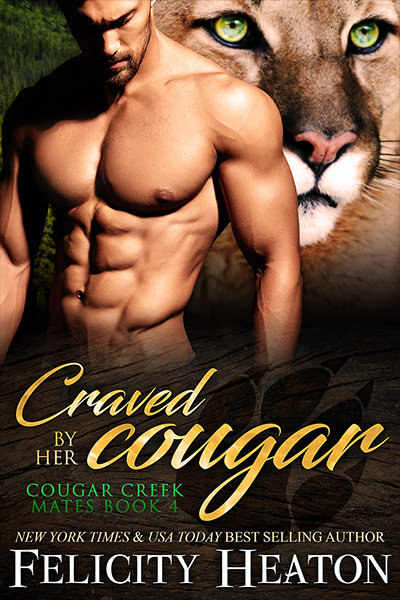 For the last twenty years, Cobalt has burned with a need of
one female, a beautiful raven-haired cougar who captured his
heart the moment he set eyes on her. His position as pride
protector has been a blessing at past mating gatherings,
keeping females away, but this time it feels like the worst of
curses, because the female who has bewitched him so
thoroughly is taking part for the first time and all he can do is
watch as males battle for her.

As much as she hates the way her mother controls
everything in her life, Ember is thankful for it as she
constantly turns away suitors, unaware of the pain she’s
sparing Ember from with every male she rejects. Every male
who isn’t the gorgeous blond with darkness in his eyes and
an easy smile she burns for with an intensity that scares her,
awakens feelings in her that have her verging on doing
something reckless. Damaged goods he might be,
dangerous and unpredictable, but with every contest over her
that pulls her closer to her doom, she grows more
determined to follow her heart, no matter the consequences.


With every fight over the right to Ember, the tethers on
Cobalt’s feelings twist and threaten to snap, a torment he
cannot bear and one that has him willing to risk it all,
because a single kiss would make even the harshest
punishment worth it. He would die for one moment with her…
his fated mate.

Holly Hell what a book! This is a phenomenally well written
and thought out book. It was such a joy to read.  It had this
wonderful flow to it and I had a hard nearly impossible to put
down.

This is the four book in the series if you have not read the
first three books do not worry these books can be read as a
standalone. But this review may give away some spoilers as
there is a back story in the book. And it mentions others from
the first few books. I so cannot wait to read more books by
felicity.

This is Cobalt and Ember's story. He has known ember is
fated mate over the last 20 years. But because she was
immature and not an adult as of yet he held off. They age
differently the normal humans even though she is well over a
hundred years old she's only now reached maturity. Your
mother has the best of intentions, but not exactly what Ember
wants. Unfortunately is bound by the rules of the gathering.
He is not allowed to participate as he and his family are the
ones too provide security for the pride. Both of them
insecure and not brave it seems. When you find out the
reasons why he is he is Unworthy of Ember, you will be very
shocked. Clear from book 1 what is holding Amber back.
Farewell meaning mother is taking over her life. Now they
both just have to come to terms decide what they truly want
and what they are willing to do to get it. I love the series I
hate to see it in end. I so hope she decides to write more
books in the series. I loved exploring the nature of the book
at Cougar Creek. It'd be nice to see what happens next
season at the creek.


And it would lead her straight to him. 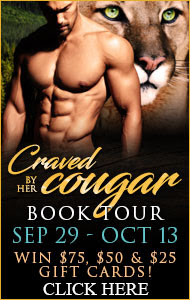 Enter the grand tour-wide giveaway to win one of a $75, $50
or $25 Amazon Gift Card at the Craved by her Cougar book
page. This giveaway is international and open to everyone,
and ends at midnight on October 14th.
Enter now: