Winner Take All
By Mary B. Rodgers 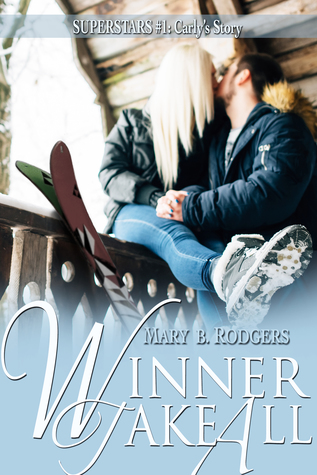 Hot shot skier and unrepentant party girl Carly
Carrington is on top of the world until a disastrous
crash destroys her championship dreams. Can
she lower her guard long enough to trust the one
man who might be able to heal her body...and her
heart?

When it comes to sports doctors, buttoned-up
Paul Blackburn is the best of the best. But when
Carly upends his carefully ordered little world,
will Paul fight his one chance at true love, or go
for the gold in...WINNER TAKE ALL!

Wow this book was simply amazing. So expertly
written and thought through, it was really hard to
put this book down. I found myself laying down
and rushing back to see what happened next.

This book is about Paul and Carly. She is an
athlete and he is her doctor and trainer. And man
is she a mess in the first part of the book. She
manages to get herself in some real trouble and
was hoping her boyfriend Alex would be there for
her, but he did not show till after her other friends
helped her out. But Paul is there to help her when
she falls apart. And she does it spectacularly, like
her dose most things. But when her boyfriend
doses something truly vile and Paul doses
something he should have not done. But will he
come to his senses in time to help her or will he
ruin it all? But I'm not going to tell you. You’ll have
to read the book to find out

A career performer and storyteller, Mary was the
keyboardist and lead vocalist in an all-female rock
band for a number of years, and has acted in
leading roles in plays and musicals across the
globe.

Her first screenplay, Common Ground, was a
finalist in the Moondance International Film
Festival competition, and she is a member of the
Screen Actor’s Guild/AFTRA and the New York
chapter of Women in Film and Television.

An avid gamer and unrepentant nerd, Mary’s
been a fan of romance, science fiction and
fantasy novels since she was old enough to hide
them between the pages of her textbooks during
geometry class in high school. She hopes you
enjoy her stories!