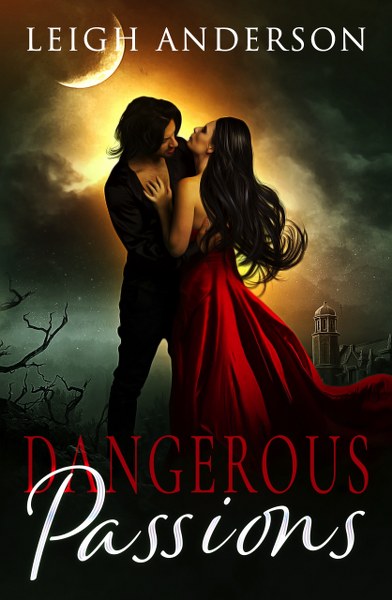 Isoline Beresford has beautiful yet haunting dreams. In
them, a man she doesn't know is calling to her. She's
inexplicably, inexorably drawn to him, until he's more real to
her than her own fiancé.

When she calls off her engagement, her enraged father
sends her to live with her ninety-year-old grand-aunt, the
Dowager Countess Bellamira Granville. If she won't do her
duty at home, he reasons, perhaps she can at least
convince Lady Granville to leave her fortune to Isoline.


But life at Thornrush Manor is not what Isoline expected. Her
aunt is as spry and elegant as a woman half her age. Her
nearest neighbor, a distant cousin, begins courting her. And
a dark and handsome artist proves a pleasant companion.

In order to save everyone at Thornbrush Manor, Isoline will
have to confront the darkest parts of herself-and discover the
secret of the man who hides in her dreams.

Fans of Daphne Du Mauier, Sherrilyn Kenyon, and Eve Silver
are sure to love this Gothic romance from Leigh Anderson.

Oh my God what a book! This was one Amazing Story.
This book is so well-written and thought through. It had a
wonderful flow to it and was absolutely impossible to put
down.

This is Isoline and her dream lovers story. Since she was
young Isoline has had very vivid dreams. So vivid it was as if
they were real oh, she would wait in a field and walk and feel
the presence of the man. She never saw his face. But she
knew he was there. After a failed courtship she is sent to be
her aunt's companion. I was so angry and her father how
could you throw his daughter out because she did not make
a good marriage. But when she arrives at her aunt's house
she is in for a shock is not an old woman she looks to be no
much older than her. Her aunt has a secret and when the
secret is revealed all hell breaks loose. Her cousin who
wants to court her goes some horrible things as well but
ultimately you will love who she ends up with for she does
not care about money and material things only love. And
when her dream Man reveals himself to her she is totally
thrilled for she finds out she already loves him in the real
world. But you will have to read to find out who it is she has
fallen for and how far she will go to stay with the man she
loves.

“Isoline…”
Isoline gasped as she opened her eyes. He was here…again…always…
“Isoline…”
She climbed out of bed, her hands gripping her satin robe as she stood, but when she looked back, the bed was gone, as were the walls of her room. She wrapped the robe around herself as the fog crept in around her ankles. She was somewhere outside. She could feel the grass under her feet and the dampness in the air, yet she was not cold. The strange sensations told her that none of this was real…yet she knew it was.
“Isoline…” he called to her again.
“I’m here,” she replied softly. “Show yourself.” She knew he would not, but still she tried to convince him to reveal his face. In the five years he had been coming to her in her dreams, she had not seen who he was, but she could feel he had gotten closer to her.
She took a step forward. Just because she was alone in a dream with a strange man did not mean she could not enjoy a short walk. She had been coming here for so long, this place no longer terrified her.
It was a large open glade, with grass up to her knees,  surrounded by forest. She had tried many times to reach the edge of the glade, but she had never made it that far. A pale blue moon lighted her way. She clutched tightly to the robe at her chest and ran the tips of her fingers along the edges of the grass as she walked. She shivered, not from cold, but from the way the grass tickled her bare calves as she walked.
She heard footsteps behind her. She slowly turned her head, but there was no one there, as usual. She continued her walk, and she heard the footsteps again, closer this time.
“I want to see you,” she said. “It is time, don’t you think?”
He did not respond, but she felt the wind lightly touch the ends of her long dark hair. No…it wasn’t the wind. It was him. She knew it was. She shivered again.
“If you cannot reveal yourself to me you need to stop bringing me here,” she said. “I…” She had delayed in telling him the truth. This man in her dreams. She shook her head, disappointed with herself. What was she afraid of? Offending a figment of her imagination?
But what she knew to be true and what she knew to be reasonable and logical warred in her mind. She knew she was dreaming. But she also knew this was much more than a dream. But if it was more than a dream, what was it? It was the unknown that scared her more than the dream itself. She no longer feared the dream as she once did. She actually longed for it. She did not know what caused the dreams to happen. There seemed to be no logical order to when they happened. One night, two nights, three nights could pass before she would find herself here. When too many nights passed that she was not awakened by him calling her name, she would miss him. Miss this place.
And yet, as a dream, she could not let it stop her from living.
But she did. She had for too long. She had to put an end to it. It was time to focus on the world of the waking.
“I am getting married,” she finally said in one quick breath.
The world stilled. For the first time in a dream, she felt cold. She pulled her robe more tightly around her and could see the crystals of her own breath before her.
“Do not be angry,” she said. “You know we cannot continue like this.”
We. As if she had a choice in being here. She could not will the dreams to come to her. She had tried. She could not change the content of the dreams. She had tried that as well. And yet…she wanted to be here. She wanted to see this man who had called to her all these years. She wanted to know him. To touch him. To see him. But if he could not give her that, she could not keep coming here.
“It is dishonorable to my future husband,” she said. “I cannot keep coming to you from my marriage bed. It is disloyal.”
From over her shoulder, she could see him breathing. He was right behind her. Her own breath stilled. They were so close. If only she could touch him.
“Just show me your face,” she panted, “and I will end the engagement.”
The hairs on her arms prickled. He was right there, so close. Almost touching her but not quite. She had to look. She turned to face him.
And he was gone.
She stood alone in the field.
“Who are you?” she yelled. 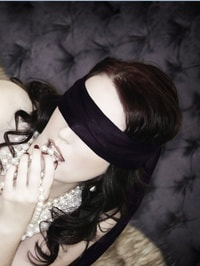 LEIGH ANDERSON loves all things Gothic and paranormal.
Her master’s thesis was on vampire imagery in Gothic
novels and she met her husband while assuming the role
of a vampire online. She currently teaches writing at several
universities and has a rather impressive collection of tiny
hats. She lives in a small town in the mountains with her
husband, human child, and two fur-children. She is currently
working on too many writing projects, and yet not enough.