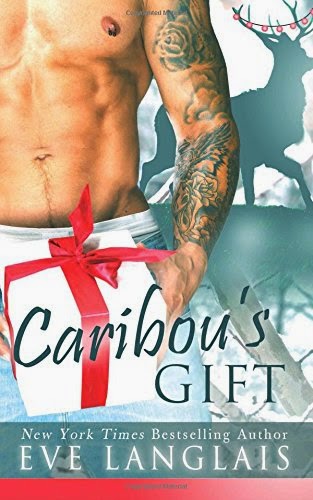 I love the writings of Eve Langlais. She has an amazing mind, god only knows were she comes up with her
Ideas. But we are blessed that she shares them with us. This book is great I had the pleasure of reading it
erlay. You are going to love her Caribou and what he ends up doing for love. And the most wonderful gift for
the little girl who's mom he is in I've with if he will only admit it to himself.
But to find out you just have to read it.

Damn it, a man had his pride and a caribou a certain majestic presence, all of which could wind up ruined if
he abased himself to play a simple-minded reindeer in the town’s Christmas parade.
No way was he wearing damned tinsel in his antlers.
Like hell was he sporting a red nose and pulling a sleigh.
But he changes his mind when he meets the woman in charge of the event.
Single mom, Crystal, is doing her best to offer her daughter the best Christmas ever. It’s their first in Kodiak
Point, and she’s not about to let some vain jerk ruin it for her little girl.
If playing dirty is what it takes…then bring on the Christmas games. As Crystal and Kyle butt heads—and
lips—they discover more than goodwill this holiday season. They’re gifted with a second chance at love.
~*~*~ Pre-order the next Book~*~*~
~*~*~Links Below ~*~*~ 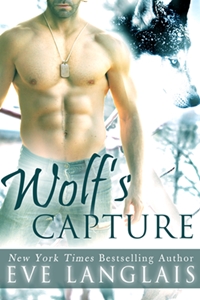 She might think she's captured the wolf, but in the end, he'll take her heart.

Brody is a soldier who misses the excitement of the military and its missions. He retired to work as clan beta in Kodiak Point. Talk about boring, until he's captured by a foreign enemy.

Not for long. This wolf will do anything in order to get away--even if it involves seduction.

First step in plotting his escape: pretend interest in a woman. But Layla isn't just any woman. She's special.

Not human. Notshifter. He doesn't knowwhat this exotic lady is other than his.

A prisoner for years, Layla isn't sure what to make of the enemy who shares a cell with her. He promises her hope, but that would involve trust. Despite her doubts, she can't help but be drawn to him. Unacceptable which means she does her best to drive him nuts.

Working together, can they escape the clutches of the enemy?

And do they dare fall in love?

Welcome to Kodiak Point where the wildlife might wear clothes, but animal instinct rules the heart.

Hello, my name is Eve Langlais
and I am an International Bestselling author who loves to write hot romance
J.  I should warn you, I have a twisted imagination and a sarcastic sense of
humor and am known for making readers giggle with my stories.
Do you love shapeshifters? I do, especially strong alpha males, the kind who
take charge and aren’t afraid to get furry and kick ass for the one they want.
I am also extremely partial to aliens, the kind who like to abduct humans
and then drive them insane...with pleasure.
Or do you like something a little darker, more serious?
Then check out my cyborgs whose battle with humanity
have captivated readers worldwide.
If you'd like to know more, read some excerpts or find out what I’m working
on, then please visit me at http://www.EveLanglais.com
or sign up for my newsletter at  http://www.evelanglais.com/newrelease .
I am also extremely active on Facebook: https://www.facebook.com/eve.langlais.98
Posted by Unknown at 12/12/2014 08:00:00 AM