History belongs to those with the courage to change it. 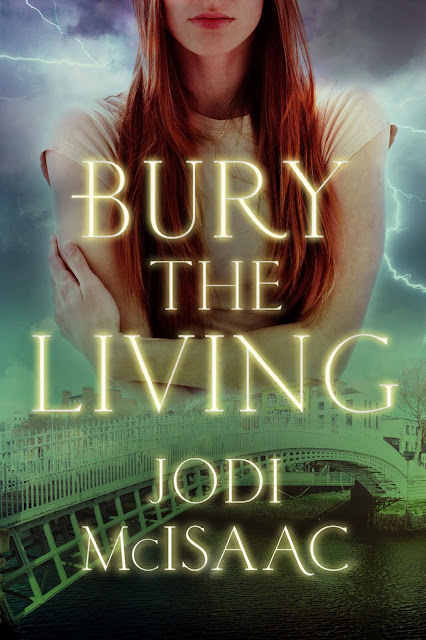 Rebellion has always been in the O’Reilly family’s blood.
So when faced with the tragic death of her brother during
Northern Ireland’s infamous Troubles, a teenage Nora joined
the IRA to fight for her country’s freedom. Now, more than
a decade later, Nora is haunted by both her past and vivid
dreams of a man she has never met.

When she is given a relic belonging to Brigid of Kildare,
patron saint of Ireland, the mystical artifact transports her
back eighty years—to the height of Ireland’s brutal civil war.
There she meets the alluring stranger from her dreams, who
has his own secrets—and agenda. Taken out of her own
time, Nora has the chance to alter the fortunes of

Ireland and maybe even save the ones she loves. In this
captivating and adventurous novel from Jodi McIsaac,
history belongs to those with the courage to change it.

First I was kindly provided an ARC in exchange for an
honest review. That being said I was surprised by this book.
It is not my normal read. I mostly read romance, but
something about the synopsis just grabbed my attention.
I have to say I did not know nearly as much about the Irish
tan war as I thought I did. Being of Irish decent it was pretty
interesting. And the twist of time travel and trying to help win
a war that took so much time to win. Even when they
thought it was over it was not.

Nora is a young rebellious girl in the 1990’s. I can remember
being that age watching my sister do some of the same
things. Thank god there was not a war to contend with when
she was 15. I was more like Nora’s big brother Eamon. I felt
so bad for young Nora growing up in all that and losing all
she cared about. But as she grew she became a better
person and eventually a humanitarian and aid worker. That
is till she is thrown back in time to help a man she has never
met except for in her dreams. But when Saint Brigid’s sisters
send her back he has no clue that she is and tells her he
does not need her help. Nora determined to go back home
seeks out the sister’s in this new time and is told she cannot
leave. The things that happen to her are truly horrible. To
think Irish would do these things to their own people makes
me truly sad. With all that senseless fighting, just to trade one
evil for another. And then there is Thomas, he is cursed to live
till Ireland is free. Knowing how that worked out. And how
long it has taken to get to where we are today, that is truly
a long time. Imagine living for a thousand years or more.
I think it could make you go mad living that long and
geting no where. Well i may have said I plan to read the
next book as soon as it is out.


When she was fifteen years old, a simple knock on the door changed Nora o’Reilly’s life—again. The knock was hard and impatient, like the people in her neighbor- hood. Nora ignored it. Maybe, just this once, her mother would rouse herself off the sofa. But no. Her mother hadn’t answered the door since the day Nora’s father had done so and been thanked for his trouble with a bullet through the eye. Nora’s small red footprints had tracked across the beige linoleum. The saint Brigid’s cross that had hung over the doorway for as long as Nora could remember had failed in its promise to protect them.


Ten years had passed, and now the linoleum was more gray than beige. Nora slipped to the front window and peered out. it was the middle of the afternoon; she’d only just arrived home from school. There’d been no warning of a raid—no banging of dustbin lids on the sidewalks to announce that the peelers had dared venture into andersonstown. Two men she didn’t recognize stood on her doorstep. They must be looking for Eamon.


Nora opened the door a crack. The first man jammed his black boot into the opening. Ballix. adrenaline flooded her body. She shoved the door against his foot, berating her stupidity. What had she been thinking? What if these men were Prods, come to finish off the rest of them?


“Depends on who’s asking. Who’re you?” He had bottlebrush hair and wore a brown leather bomber jacket. He looked old enough to be her father, only her father had been wiry, and this man looked like a rugby fullback. His companion had a thin, sharp face and kept looking over his shoulder.


“Doesn’t matter. We’ve been told to fetch you.” “Fetch me where?” Nora tried to push the door closed again, her mind lurching. Whoever these men were, she wasn’t going anywhere with them.


“The commanding officer of West Battalion has a few questions about your extracurricular activities. C’mon now. Let’s go without a fight.”


Nora’s fear turned to dread. “Like hell i’m going with youse.” she stamped on his foot, but he responded by putting his shoulder to the door and sending it flying. Nora staggered backward, colliding with the coatrack.


Shite, shite, shite. She scrabbled to her feet. She’d almost rather be caught by the Brits. The Provisional iRa didn’t tolerate petty crime in their area, and they certainly didn’t believe in such luxuries as courts and trials.


“Ma! Ma!” she screamed. Her mother would know these men; Nora’s father had been a PiRa member from the beginning.


Her mother came padding into the hall, still in her dressing gown, weaving slightly, a glass of whiskey clutched in her hand. “Paddy sullivan, what is the meaning of this?” “sorry, Mrs. o’Reilly, but o’connor wants to see her. Seems she’s been selling drugs up at the school.”


Think, Nora, think. she grappled for an explanation, a plausible denial, anything that would get her out of this. But panic clogged her brain, and all she could think was I’m fucked.


She didn’t know her mother could move so fast. Suddenly they were nose to nose. “Oh, aye? Is that true?” Mrs. o’Reilly demanded.


“You watch your language. Jesus, Mary, and Joseph, what am i going to do with you? What would your poor father say?” Her mother shook her head, then turned back to the PiRa men.


“Whatever she’s done, we’ll take care of it here, so we will. Youse all head out, now.”


“Sorry, Mrs. o’Reilly, but we’ve got our orders.” Paddy nodded to his companion, who brushed past Nora and her mother and pounded up the stairs toward the bedrooms.


“Oi! Houl on! Youse said you just wanted to talk!” Nora shouted after him. Mrs. o’Reilly looked like she was about to follow, but Paddy laid a hand on her arm.


“Ma, I’ve done nothing wrong! I swear it!” a faint sheen broke out on her forehead, and the blood drained from her fair skin.


The sound of drawers being emptied and furniture being overturned traveled down the stairs. Mrs. o’Reilly sank down into a kitchen chair and took a large gulp of whiskey. she set the glass down with a clunk and put her head in her hands.


“He went out with the lads,” Nora mumbled. she glanced toward the door.


“Don’t you be thinking of doing a runner,” Paddy warned. He wrapped his meaty hand around Nora’s up- per arm.


“I’m not! But youse wait until Eamon gets home.


He’ll sort youse out all right.”


“She’s quite the lip on her, hasn’t she?” Paddy said to the slumped form of her mother.


Loud footsteps on the stairs made them all look up. Paddy’s friend tossed him a clear plastic jar of tiny white pills.


“I got it from your room,” the other man said with a sneer. “Unless you’re telling us your ma or your brother put it there?”


“Nora! Are you trying to get yourself killed?” Mrs. o’Reilly said, locking her watery gaze on her daughter. “Do you think i don’t have enough trouble as it is? Answer the man! Is this yours? What’s in that bottle?”


“Oh, aye?” Paddy said, his grin widening. “With wee happy faces stamped on them? Looks like a fine stash o’ Molly to me.”


“It’s not,” Nora said.  She stared at the floor, letting her lank red hair fall forward to hide her face.


“Where are youse taking her?” Mrs. o’Reilly asked. “Can’t say.  She’ll not be hurt.  But o’connor wants to talk to her himself, so he does.”


“Then tell him he should come here!” Nora said.


Mrs. o’Reilly groaned. “Maybe he can talk some sense into her. But sure and you’ll be bringing her back here as soon as he’s asked his questions.”


“Ma! You’re not letting them take me?” Nora’s brown eyes widened with panic. “They’ll knee me, so they will!” she’d seen it once, a man with both kneecaps shot through.  She could still hear his screams, see the blood running down his legs. But then again, he’d been lucky not to get a bullet in the head, like her father.


“You and I both know they’ll not give us a choice, now, don’t we? Go on with the lads, and answer their questions,” her mother answered, pulling herself unsteadily to her feet. “Mind you be polite. Maybe you’ll listen to Mick O’connor more than you do your own mother.”


With a nod to Mrs. O’Reilly, Paddy and his friend each took hold of one of Nora’s scrawny arms and dragged her out the front door toward a waiting van.


“Someone help! I’m being kidnapped!” Nora yelled, craning her head frantically in search of a savior. Neighbors peeked out from behind curtains, and two boys stopped their game of football down the street to stare. No one came forward.


“Shut yer gub!” Paddy said, giving her a rough shove into the van. “I told yer ma we wouldn’t hurt you for your da’s sake, but if you make it hard for us, all bets are off.” “Eamon!” she yelled, clinging to the door, hoping her brother was somewhere nearby. He’d stand up to the Provos. He’d protect her. “Eamon!” 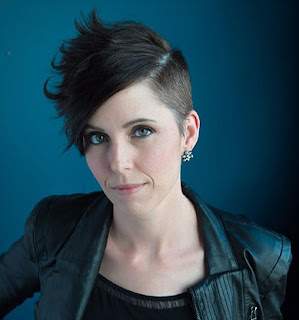 Jodi McIsaac is the author of several novels, including A
Cure for Madness and the Thin Veil Series. She grew up in
New Brunswick, on Canada’s east coast. After abandoning
her Olympic speed skating dream, she wrote speeches for
a politician, volunteered in a refugee camp, waited tables
in Belfast, earned a couple of university degrees, and started
a boutique copywriting agency. She loves running,
geek culture, and whiskey. 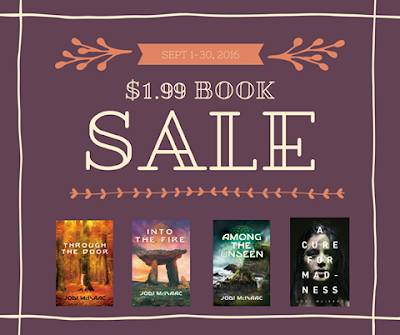