*** Review For Offered, Taken, & Claimed by the Werewolves By Crystal l Shaw ****

I am writing this review for my blog on all three books in the
series. But if you go to my Amazon or Goodreads page you
can see my individual reviews. If you want but all is here to see.

Unlike some books that focus on one set of characters,
Crystal Shaw has all three couples over three books. So you
see the whole picture at once. Book one starts with Ariana
(Ari) and Lizie they are on their way to the offering. Every
year all women between 19 and 23 have to offer themselves
to the wolves that protect their town. They have not taken
anyone in a few years but this year that all changes. The
Alpha Devin and two of his pack Betas Caleb and Dom,have
found their mates, Ari and Lizzie. But Betas Caleb and Dom
are in for a big surprise when they get Lizzie home. Now all
the wolves have to do is convince their woman they are their
mates. Normally things go smoothly at the offering but boy
was everyone in for a surprise.

In book two we meet our third couple Veronica and Vince.
Veronica is not a human but Vince is drawn to her all the
same. And oh he in for a surprise his hot little mate is a
vampire. And she is a bad-ass as well. She is truly a
wonderful surprise for Vince, but she has her issues too.
Things happened to her in the past that were horrible. Now
she just needs to let Vince help to make her whole again.
The last book is the conclusion of the issue that was a
problem since book one. Veronica was sent to Devin to ask
permission to open a blood bank for her kind, but as the
story progresses something is going wrong with the blood
there are being given. As it is against the law to drink directly
from the vein.

In book three the story continues. There is going to be a war
and you will never believe who is behind it all.  The rouge
pack and crazy vampires all out to kill off every other
vampire. Man what a crazy Waco they have on their hands.
But they all underestimate the high and powerful wizard, that
trys to keep the world under control. Never tick someone
that powerful off. I loved these books so much I read them
twice. I cannot wait for the next book. Near the end of book
three Devin sent his most trusted wolf Jude to hunt down the
rouge pack. I cannot wait to read their story. Now before
I ruin this for you I will leave off here.  I hope you enjoy this
book as much as I did. If you do like this book, please
consider leaving a review. The Authors really like it when
you do; they value your opinions too. 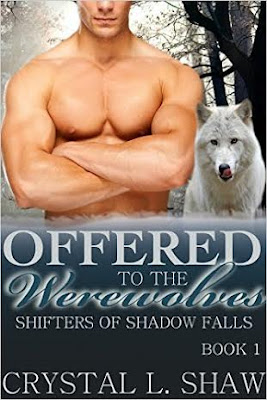 Offered to the Werewolves (Shifters of Shadow Falls Book 1)

Every year Shadow Falls offers its young women to the
werewolf shifters in exchange for the town's protection --
there’s no refusal.

Ariana and Lizie grew up relying only on each other, finding
their confidence and happiness in one another. Today of all
days, they’re relying on each other for strength. Today they
are being presented to the Shadow Falls werewolf pack. It’s
law; Ariana and Lizzie have no choice. The werewolves
haven't taken anyone in decades and the pair were sure
this year would be no different. But as the day dawns, Ariana
can't shake the uneasy feeling that something isn't right.

Devin, the Alpha, may keep his emotions in check when it
comes to his pack, but he can’t help the grin pulling at his
lips when he sees his mate. His confident, strong-willed
mate, Ariana, doesn’t bow to anyone, but he’s determined
to win her over.

Betas Caleb and Dom have an even harder battle to fight
with their shared mate. Lizie may seem wild and feisty, but
she’s terrified and for good reason. They have no idea that
their mate has a secret she’s been hiding for years. A secret
so dark, she’s never told a soul. But there’s nothing she
can hide from her mates. 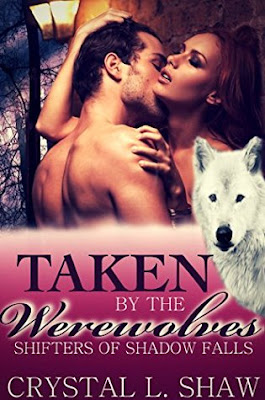 Taken by the Werewolves (Shifters of Shadow Falls Book 2)

Shifters of Shadow Falls Book 2 -
contains Parts I-III of Taken by the Werewolves
Every year Shadow Falls offers its young women to the
werewolf shifters in exchange for the town's protection --
there’s no refusal.
Ariana is a beautiful, stubborn spitfire and the mate to the
most powerful alpha, Devin, on this side of the nation. He
took Ari without her consent and bulldozed his way through
her calm, hard-earned life. Now that the claiming day is here,
she continues to struggle with her new identity which is
simply to be his mate and be happy with it. She’s never let
a man dictate her life, why should she start now?
Lizie, the sweet yet hurting latent wolf, is finally starting to
see her worth, as Dom and Caleb, her two mates, show her
how perfect she is, with or without her wolf. She’s hidden her
emotions and buried her desire to be seen as the strong wolf
she’s always wanted to be, but her mates won’t let her hide
anything from them.
Veronica has thrived with control and aggression. The
badass vampire keeps everyone at a distance – for good
reason. Yet her mate seems to think it’s all a game and that
her past isn’t dictating Veronica’s behavior. She has to give
up control to let him claim her, but how will Vince, her sweet,
obedient pup (who’s really a barely-tamed, massive, hulking
beast) react when he discovers her control has been a guise
for her pain?
Taken by the Werewolves (Parts I-III) is the complete
collection of the Taken by the Werewolves series. All the
individual episodes are available in kindle unlimited. 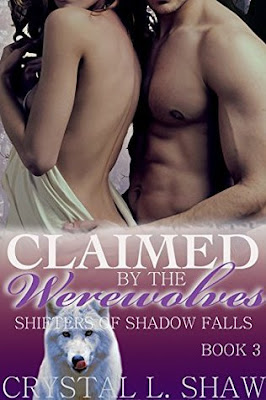 Claimed by the Werewolves (Shifters of Shadow Falls Book 3)

Every year Shadow Falls offers its young women to the
werewolf shifters in exchange for the town's protection --
there’s no refusal.

Lizie is a gorgeous, spirited, latent wolf radiating light and
happiness, but her mates, the sexy, muscular Betas of the
Shadows Fall pack, know she's suffering inside with the pain
from her past. Her mates are opposite in many ways. One
hard and savage, the other a skilled hunter with deadly sex
appeal, but they share one thing in common, their love for
her and their need to heal her agony. Tortured and broken as
a youth, she learned to live in denial to become the sweet
and loving latent wolf they've claimed. She can't get passed
the truth they've forced her to face. Will she learn to accept
that her wolf may never surface? Or will she hold onto her
pain and never be able to give her heart to her mates?

As a hot, bad ass vampire in leather, Veronica never needed
anything from anyone, but she's the mate to Vince, a beast
of a werewolf covered in sex appeal and lust. She's
everything he needs. She's willing to mate the mutt, after all,
she feels the same pull as he does, but when the claiming
gets rough, Veronica's reminded of a past that turned her into
the cold, hard killer she is today. Can he earn her trust and
truly claim his wounded mate? Or will Veronica put the pup
in the past, right where those feelings of her's belong?

Shadow Falls has a problem with the corruption running
rampant through the Authority. As Alpha to the most powerful
pack on this side of the nation, he's determined to protect
his pack and make sure those at fault receive swift and
severe consequences for their actions. With his beautiful,
strong-willed mate back at home, debating on whether or
not she'll give him pups, he should be focused on getting
revenge, but all he can think about is her. 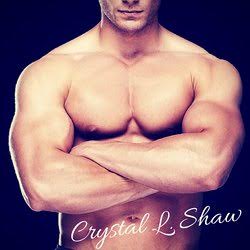 I love fantasizing about sexy alphas who conquer
without mercy and take risks without fear. There are
always obstacles in life and love ranging from
tempting vices to scarred pasts, and I enjoy exploring
those struggles in my writing. Above all else, my
strong heroines will prevail and love will conquer all.
Always.