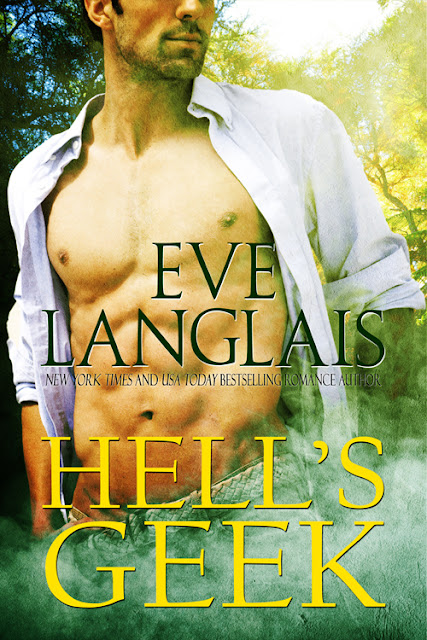 The Welcome to Hell series
(is best read in order for full enjoyment of
Lucifer and his ongoing matchmaking attempts):

OMFG I love Eve's books. They are just phenomenal reads.
And this one is no exception. I love our geeky hero Adexios,
he is not your typical hero. He uses him brain to figure out
how to get out of a situation. That is if Valaska doesn't kill
it first. She is wicked strong and thrives in danger, hell she
runs to it. Poor Dex thinks she is insane, but loves her
anyway. This story has more Lucifer in it too, and man I
love the bits with him in it. He even gets to play Hero to his
horror which is funny as hell. The new foe he has was one
hell of a surprise at the end. And left Gia steaming mad.
Makes you wonder what she may do to get at this villain.
Mother earth on a rampage? Man I'd want to stay out of her
way. Oh I can not wait to see what happens next. Now
before I ruin this for you I will leave off here.  I hope you
enjoy this book as much as I did. If you do like this book,
please consider leaving a review. The Authors really like
it when you do, they value your opinions too.

Big deal, so he kept losing the oar. It wasn’t Adexios fault the
Styx monsters were working against him, but tell that to his
dad. Charon is determined to make a man out of
him—whether his mother likes it or not—and Lucifer has
offered to help. Help means sending Adexios in to the wilds
of Hell with an Amazon warrior as his companion.

The savage fighter doesn’t know what to think of her geeky
partner. Adexios attracts Valaska with his brains instead of
brawn. He also shows a cunning courage she can’t help but respect.

They’ll need all the skills they can muster, though, if they’re
going to prevail against the newest threat to Hell. With the
wilds submerged by seawater, and monsters hungry for flesh,
they’ll have to fight to stay alive, and learn opposites not only
attract, they explode.
(With passion, not guts, in case that wasn’t clear.)

Welcome to the pit where the danger is never ending,
the sea monsters are multiplying, and Lucifer is planning
the wedding from Hell.

“Love is but a game and I control the pieces.”
Lucifer’s philosophy.

Gaia’s retort. “I told you not to tell people about the cuffs.”

Standing under the hot spray of his shower, Adexios had just soaped himself when a deep voice said, “Tell me you’re whacking off and not actually bathing to avoid your meeting with me.”
Hear that unmanly squeak? Yeah, that came from him as he clung to the curtain and peeked around the edge. “What are you doing in my bathroom?”
Lucifer’s dark brows arched. “I left strict instructions that I wanted to meet with you the moment you brought in your boat—late again. While I commend you on never being on time, especially since it drives my staff nuts, defying me isn’t conducive to a long and torture-free life. Some would even say it’s moronic.”
“Really?” Adexios brightened. “I don’t suppose you could tell my mom I did something stupid? It would totally make her day.”
You’d think that a grown man in his thirties wouldn’t give a shit anymore, but when his mom was happy, she baked, and given his cooking skills equaled varying degrees of burnt, he could use some home-cooking lest he wither to skin and bones. He was, after all, his father’s son.
“Mama’s boy,” Lucifer uttered with a shake of his head.
The devil said it as if it was a bad thing. Adexios had two-dozen homemade oatmeal raisin confections in his Cookie Monster jar that said otherwise.
“Is there any particular reason you felt a need to rush our meeting? I was planning to come as soon as I washed and put on some clean clothes.”
“So finish off and get dressed. We need to talk.” Lucifer hopped onto the vanity and crossed his arms, whistling as he waited.
“Um, could you like maybe step into the next room while I finish?”
“Feeling inadequate?” Lucifer smirked. “I can’t really blame you. My wench doesn’t call me her stallion for nothing.”
“I thought it was because your fear of commitment made you run like the wind.”
The devil’s eyebrows drew together in a large black hairy beetle. “I fear nothing. Not even our upcoming”—Lucifer swallowed hard—“engagement party. The horror of it. Whatever happened to living in sin? I like sin. I encourage sin. But oh no, she wants to get married she says. She wants to lock me into a monogamous agreement. It’s utterly unnatural.”
Given Lucifer’s woebegone look, Adexios couldn’t help but throw him a verbal helping hand. “But just think of the benefits. Now when you stay late after work, and she harangues you, you can accuse her of stifling you, of not trusting, and of not wanting you to get ahead with your work.”
“You mean start a fight?” Lucifer perked up. “Fighting means makeup sex. I excel at makeup sex. And spontaneous sex. And…”
As Lucifer went on to list the many ways he excelled at fornication, Adexios popped his head back in the shower. Rinsing off the rest of the soap, he wondered, with a curiosity that plagued the mentally acute, what had brought Lucifer to his home.
Locks couldn’t keep the devil out if he wanted to see a person. The big guy had the ability to pop in on anyone anywhere in Hell, but he didn’t do it often. Lucifer claimed a trick like that was most effective when used sparingly. Apparently, the screams were more authentic that way.
Clean at last, Adexios shut off the water then grimaced. Whoever had built this place hadn’t been thinking when they put the towel bar out of reach of the shower. This meant he’d have to flash his boss. No big deal. After all, Lucifer truly had seen it all.
And I’ve nothing to be ashamed of.
Adexios yanked the plastic curtain to the side and stepped out. However, his hand froze in the process of reaching for a towel as he noted, while Lucifer sat atop his vanity, still expositing on the virtues of his lovemaking, a tall, very tall, woman stood in his bathroom.
Did he mention she was very attractive too? Blonde hair swept into a high ponytail, a muscular body that retained an hourglass shape displayed in a warrior-woman outfit consisting of a leather corset, which pushed her breasts high and created a shadowy valley, tight leather shorts hugging curvy hips meant for grabbing, and knee-high black boots that were just fucking hot. She also wore a sword at her side and a very amused expression.
“Well, hello there,” she said, her voice husky and sensual.
Too sensual. A certain part of him perked in interest, and Adexios fervently wished, as his cheeks heated, that a Styx monster would rise from the shower drain and swallow him whole.


the needs of their flesh? Well, let’s just say, you shouldn’t be reading
my stuff at work. The door is wide open, explicit and hot.

Have a question?  Want to say hi?
Please address inquiries to

Want to make sure you do not miss my post.
You can also follow me through my social media Links or
Contact me By e-mail.
Kimmiesuesbookreview@gmail.com
Sign up for email of blog & or
Newsletter to the right
FaceBook   Amazon Profile
Good Reads Profile   Twitter
Posted by Unknown at 10/30/2015 09:00:00 AM No comments: