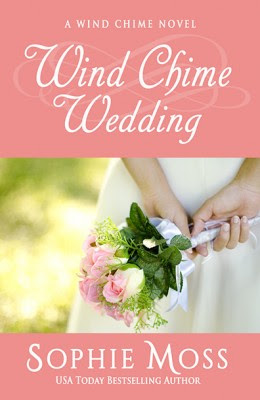 Second-grade teacher, Becca Haddaway, is weeks away
from walking down the aisle when she learns that the Heron
Island Elementary School is about to be shut down. In the
midst of a whirlwind of wedding planning, she launches into
a last-ditch effort to save it. But the one man who can help her
is determined to make her question every decision she has
ever made—including the man she’s about to marry.
Former Navy SEAL and son of the current Maryland
governor, Colin Foley, is finally starting to feel whole again
after losing his leg on a career-ending deployment in
Afghanistan. After struggling for months to figure out what
to do with his post-military life, he’s found a new mission
—opening a rehab center for wounded veterans on the
peaceful Chesapeake Bay island. All he needs now is
a woman to share his new life with…
and he knows exactly who he wants.

With a little help from the island’s magical wind chimes, can
Colin convince Becca to change her mind before it’s too late?

Sophie Moss is a USA Today bestselling author of five
full-length romance novels. She is known for her captivating
Irish fantasy romances and heartwarming contemporary
romances with realistic characters and unique island settings.
As a former journalist, Sophie has been writing professionally
for over ten years. She lives on the Eastern Shore of
Maryland, where she's working on her next novel. When
she's not writing, she's testing out a new dessert recipe,
exploring the Chesapeake Bay, or fiddling in her garden.
Sophie loves to hear from readers.

You can also follow me through my social media Links or

Newsletter to the right

**** Cover Reveal & Giveaway For To Mate an Assassin by Ceri Grenelle ****

Love is her enemy…until his beast sets her free.
Cymbeline Kendall’s life is quiet, solitary—until a letter
appears in her P.O. box. Then she becomes an Incendiary,
a human chosen at birth to be trained to strike like lightning to
take out the most dangerous of the Werekind, then fade back
into the shadows.

She is a weapon only to be used by the leader of North
American shifters. But when she learns the Alphar was
unseated three years ago, she sets out to find who’s been
pulling her trigger.

Kerrick Masterson has borne the burden of leadership for
only a short time, yet he already feels the Alphar power
tempting his soul toward the insanity that destroyed his
predecessor. He has no time for the woman who breaks into
his compound claiming to be his Incendiary, but his beast
insists he make the time—for his mate.

In one searing, soul-consuming breath, everything Cymbeline
was taught to believe is ripped away. Yet the mystery of
who’s been sending her orders remains…and finding the
answer could lead to all-out war.

Warning: Contains an assassin who doesn’t tolerate those
who hurt the weak, and a shifter leader determined to unlock
his new mate’s repressed emotions—even if that puts his
balls at risk. Explicit sex, violence, and references to abuse
that could be rough on sensitive readers.

I've always had an active imagination. An imagination that
usually took form in the way of zoning out in the middle of
conversations. I eventually decided it was time to share my
daydreaming with the world and began to put my musings on
paper. It started with Harry Potter fanfiction and grew from there.

I am currently living it up in Northern California after a big
move from New York City. And by living it up I mean staying
home with my cats, obsessively watching episodes of my
favorite TV shows, all of which are extremely geeky, and
simultaneously reading the next book on my reading list.
I do all this while trying not to pig out on unhealthy snacks.
As you can tell, I lead a busy life.

You can also follow me through my social media Links or

Newsletter to the right