Lex and Elizabeth can finally be together as mates. But the
Lycan who killed her is back, and he's threatening the King.
Will they be able to bring down the threat to their future
happiness, or will Elizabeth's fears tear them apart? Find out
in the newest edge of your seat title in Candace Blackburn's
Return of the Lycan King Trilogy!

Lex thought he'd lost her, but Elizabeth is back and she is his
mate. But between her getting used to life as a Lycan,
threats from dangerous elements looming over their heads
and very odd changes in the Lycan kingdom happening all
around them, nothing will be easy. Lex and Elizabeth's love
has to be the strength to pull them through.

Holly freaking hell what a book! The book is just so
well-written and thought through. It just had this wonderful
flow to it.

This book is about Elizabeth and Alexi. Well it includes others
form book one too. If you read book one you know that
Elizabeth survived her death. But now she is trying to make
up for as much lost time as she could with Lex. This book
also touches on Daren and being the new king. And man the
things he can do are just amazing. Then he has an Idea of
how to help Lycan amputees and it is wonderful. Just makes
me wish that this worked for all the warriors. Oh and wait to
you see who Jessica falls for. Like man she picked an
amazing person. I am so ready for book three. But my
favorite part is the surprise Elizabeth has for Lex and when
he hears it before she even tells him is wonderful.

"Alexei, are you okay?"
"No. I'm not." He turned, facing her now but still staying by the window. Keeping distance between them. "If those two... damnable women had not drugged my stew. If you hadn't seen me with them. If you hadn't been attacked. So many what ifs, and so many lost years. All this time, we could've been together. We could've had every night together. Met every morning in each other's arms." He slashed his arm through the air. "No weeks or months spent wondering if I'd get to see you again. No missing you with every beat of my heart."  The tears steadily flowed. His canines had dropped, and his eyes held the unmistakable telltale yellow of a transitioned Lycan. Claws tipped his fingers. Wolf and man seemed to battle for control, and Lex was emotionally raw. "So many nights I wished you were there, so I could tell you I loved you. Every night, I prayed you were safe. And many nights, I asked God why you couldn't be mine. But. You. Were. And the idiocy of three people cost us two thousand years of happiness."
"You're right," she said as she rose off the bed. "I can't understand why any of this happened. I've questioned the very same thing, and can find no answer. But we're here together now. And isn't that what counts?" He watched as she took slow steps toward him, and his expression slowly began to soften. "In a matter of speaking, you claimed me that night in Portugal, and we've been together since."
His eyes momentarily widened in surprise. "Yes, but we spent so many nights apart. Nothing should have separated us. Nothing." He was right. There was no sense trying to talk him down when she believed what Lex said just as strongly as he did. "You mentioned Portugal. Were you following me?"
Nodding slowly, she now stood in front of him. "Yes. Jules made sure I had control of my hungers, and taught me how to use my strengths. Once that was done, and I was confident in my abilities, I went in search of you. By that time, you were serving the King. And I followed you on your missions."
"When I saw you, I damned near lost track of what I was doing."
She smiled, remembering making eye contact with Lex for the first time. The sensation was electric, the pull of a Lycan mate bond weakened, but still present. "But you did your job, and then you came to me."
His claws retracted, and a smile curling his full lips, he nodded. "And then I came to you." He pulled her into his arms, and embraced her firmly. "I mourn all the moments we lost."
"As do I, Alexei. But we have the future."
His chest shook as he exhaled a ragged breath. "Yes we do. I can't lose you again, Elizabeth." 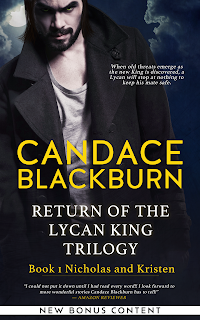 
Return of the Lycan King: Nicholas and Kristen

Return of the Lycan King: Lex and Elizabeth


Candace makes her home in North Carolina with her high
school sweetheart husband and their two sons. She's an
indie author who has published two previous romances (with
a bit of fantasy in each), Tristan's Redemption and Nate's
Forgiveness. Her current works are all paranormal romance
(her favorite genre to read!) and are set in her home state.
She loves coffee, cold weather, the Boston Red Sox,
theCarolina Panthers, and hearing from fans.

Rafflecopter for Return of the Lycan King:


Candace is offering one (1) lucky Grand Prize winner a $25
Amazon Gift Card and three (3) Runner-ups an eCopy of
Return of the Lycan King: Book 1: Nicholas and Kristen!
To enter, simply fill out the Rafflecopter below: