Drakon Unchained (Blood of the Drakon #5) 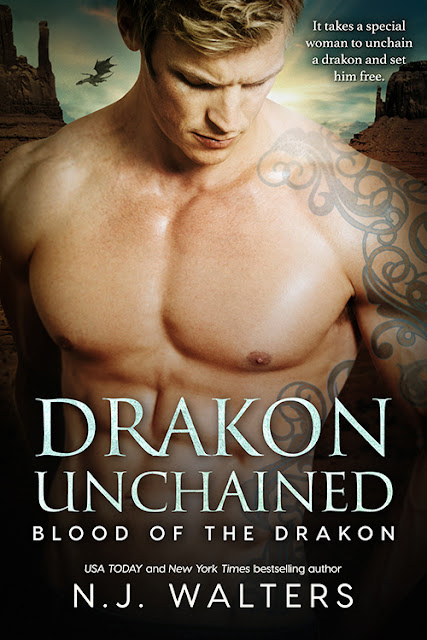 Victoria Marshall is living a lie. She works for a member of
the Knights of the Dragon, a secret society that traps and
uses dragons for their own gain. As a child, she made an
unlikely friend—a drakon. He went missing, and she’s spent
the past twenty years searching for him. The only thing
distracting her from her mission is Luther Henderson, her
boss’s new head of security.

Luther is also living a lie. One, if discovered, could lead to a
fate worse than death. He’s attracted to Victoria, but can’t
fully trust her, doesn’t know if she’s truly innocent or a true
member of the Knights. It’s not only his life at stake, but
those of the people he loves.

As they’re thrust deeper into the dangerous dealings of the
Knights, they each have to share their secrets in order to
survive.

The Blood of the Drakon series is best enjoyed in order

Drakon Unchained (Blood of the Drakon #5)

Once upon a time N.J. had the idea that she would

like to quit her job at the bookstore, sell everything she owned, leave her hometown, and write romance novels in a place where no one knew her. And she did. Two years later, she went back to the bookstore and her hometown and settled in for another seven years.
One day she gave notice at her job on a Friday morning. On Sunday afternoon, she received a tentative acceptance for her first romance novel and life would never be the same.
N.J. Walters is a New York Times and USA Today Bestselling author who has always been a voracious reader, and now she spends her days writing novels of her own. Vampires, werewolves, dragons, time-travelers, seductive handymen, and next-door neighbors with smoldering good looks—all vie for her attention. It’s a tough life, but someone’s got to live it.