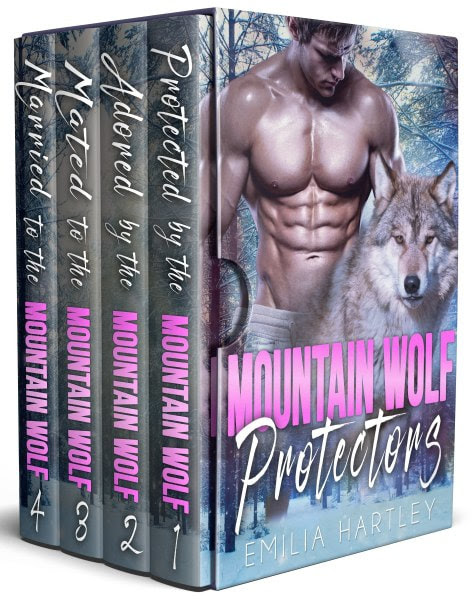 Get the complete BESTSELLING Paranormal Romance
Series packed with Romance, Action,
and lovable characters throughout!

The Mountain Wolf Protectors Box Set is complete with all
the drama, romance and suspense your heart desires. By
the time you reach the end you'll be begging for more! This is
one series you do NOT want to miss!

Book 1 - Protected by the Mountain Wolf

Book 2 -Adored by the Mountain Wolf

Book 3 - Mated to the Mountain Wolf

Book 4 - Married to the Mountain Wolf

What are you waiting for? Jump right into the adorable
story of Nova and Amara now!

More about the books in the box set:

Protected by the Mountain Wolf
Book 1

Amara's life changed the moment she was attacked by a
group of wolves. She was only 15 at the time, who could
blame her for ignoring her grandfather's warnings? She
quickly began to believe all those stories he told her about
the wolves who protected their town, Strathford. The wolves
who could turn into humans. Shifters, as she learned they
were called.

Ten years had passed since then, and Nova still couldn't
forgive himself for letting the Valley Clan slip into their
territory unnoticed. If only he had been there in time. Since
that day, he made a vow to himself to protect her, no matter
what happens. Though he didn't personally know Amara, he
felt a connection to her after watching over her all these
years. With his curiosity growing each day, he finally decided
to visit her at work. He'd talk to her for an hour, settle his
curiosity and then never speak to her again. Or so
he thought...

Adored by the Mountain Wolf
Book 2

Two weeks after she started living on the Compound - the
home of the Mountain Wolves - Amara was getting anxious
to return to her life. She had a job, friends and family to
return to. Not only that, she had to make sure her sister was
safe from her psychopath boyfriend, Kal. If only she could
tell Sadie the truth, that he was the wolf shifter who wreaked
havoc on Strathford for all these years.

As much as he wanted to protect her, Nova knew that he
couldn't keep Amara from her life forever. He and the
Mountain Wolves have been vigilant in the fight against the
Valley Clan, but they begin to lose their footing as the
attacks increase in frequency. When Nova is reminded he
has to protect his pack he has no choice but to bring Amara
with him, for her safety.

Mated to the Mountain Wolf
Book 3

Weeks after the war between the Mountain and Valley clans
ended, resulting in Kal's capture, things were finally starting
to get back to normal for Amara. Well, as normal as they
could be in preparation to marry a wolf shifter. Before Nova
and Amara they could officially be considered mates, there
were a series of trials that needed to be passed. And if she
were honest, the thought of failing scared her more than
anything. To make matters worse, her secret admirer just
began to tip the scale from flattery to all out stalker.

Even after Kal was captured, and the horrors Amara had
faced in her life were over, she still wasn't completely safe.
And that's what angered Nova the most. He just had to work
that much harder at protecting her.

Married to the Mountain Wolf
Book 4

The day finally came. Ten years ago, Nova would have never
imagined that he'd be standing where he stood today. With
the odds completely against him, this wasn't even a thought
in his mind. The first night he saw Amara seemed like forever
ago and now here he was, standing, waiting for his bride to
meet him at the altar. Amara. His Bride. His Mate. With all of
the shit that had happened over the past few months, he
was finally glad to see his woman happy, in all her glory. He
wouldn't let anything interrupt this day. Today will be perfect.
For Amara's sake. 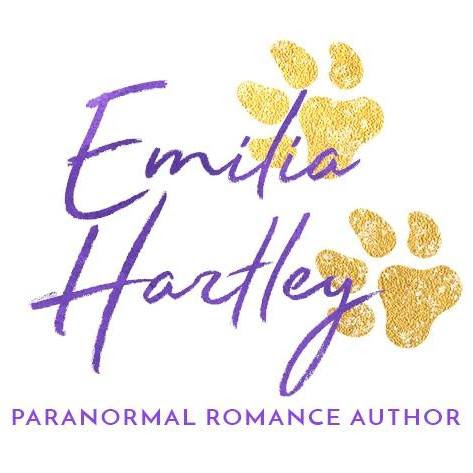 Reading wasn't always Emilia's passion, but over the years
she developed an irreplaceable love for books. She writes
about large, protective alpha males and their strong, sexy
female mates.

If you enjoy steamy shifters and fated mates,
then you'll LOVE Emilia's books!