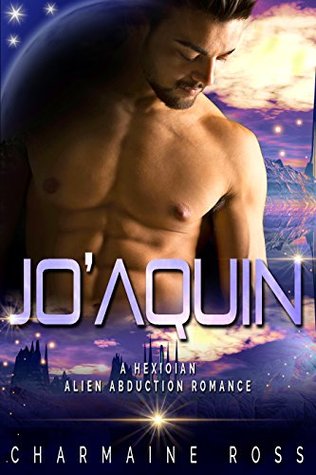 A jaded Starfleet Commander. A lonely human.
A fight to free the universe.

When her car breaks down in the middle of nowhere, scared
and alone, Lauren mistakes a light in the sky for rescue. The
help she thinks is coming turns out to be a terror far more
sinister than she ever could imagine.

Jo’Aquin is honour-bound to fight the war against the
Reptiles. He has a personal score to settle with them and he
won’t let anything stand in his way. Stationed as protector
over the Earth, Jo’Aquin chases a suspicious Reptilian craft
as it crashes though a wormhole and into another galaxy in
a failed attempt at escape.

Lauren wakes to find herself on an alien planet in the arms
of the sexiest man she’s ever laid eyes on, only to learn that
he’s an alien and she’s stranded on a planet that is definitely
not Earth. When they’re taken prisoner by the planet’s
natives, an old shaman woman tells Lauren she is the key to
free the mind-enslaved from the evil Reptiles.

Jo’Aquin is imposing and aloof, and Lauren knows he hides
a soul-destroying secret. Lauren has her own secrets. But
there’s something about the way that he touches her that
sets her skin on fire and sparks flying through her veins.

Can Lauren be the saviour everyone thinks she is, despite
the desperate battle of life and death she finds herself in?

Can Jo’Aquin save the woman who, against all odds, has
stolen the heart he was determined never to give?

Holy freaking Gods with a book! That was a truly amazing
book. It is so well thought out and so well written.
Charmaine has a wave pulling you in and holding you to the
end of the book. Return.

This is Lauren story. And how she meant Jo’ Aquin. She's
stranded down in the middle of the desert when a bright light
Shone on her in the next thing she knows oh, she's being
abducted by aliens... these are not the nice kind of aliens
either. These are scaly lizard men. When Joe is Quinn on his
Starship realizes they have taken a human he is in Pursuit
and going to save the human. To his surprise though it is a
beautiful woman and is he is thrown in a pod to another
planet Through the Wormhole there is no telling how this will
end for them. When they land on the Pioneer thing meet the
natives and soon learned that she is the only hope to save
them all but to do so she may very well have to in her life.
Now Joe just needs to find a way to save it because while
they have been spending time together he has fallen deeply
in love with her but he hasn't told her yet. Now to find out
exactly how this happened you're going to have to read this
book but you are so going to enjoy it. 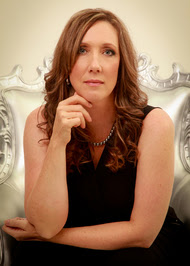 My first foray into romance was as a fourteen year old where
I fell hopelessly and eternally in love with my hero as only a
teenager can. Instead of watching movies and staying up
late, I would go to bed at eight thirty and continue my very
romantic, very safe, love affair.


Since then, I have fallen in love with many heroes, some less


safe than what my teenage brain could possibly imagine.
After earning a Fine Art’s Degree, a Diploma of Secondary
Education and a Diploma of Marketing, I worked as a
Graphic Designer in various advertising agencies as well as
in-house marketing roles and am currently involved with
digital marketing and everything web in my current position.
But I always return to writing.


Although I have traveled, I always return to my home town of
Melbourne and live with my husband, two children and two
cats in the ferny-greens of the Dandenongs. If I'm not
working on my latest romance and falling in love with yet
another hero, you’ll find me reading, watching and basically
indulging in my addiction to any story on any media type
I can get my fingers on.