★★★ Review, Giveaway & Book Tour For THE VIRGIN AND THE VISCOUNT by Charis Michaels ★★★ 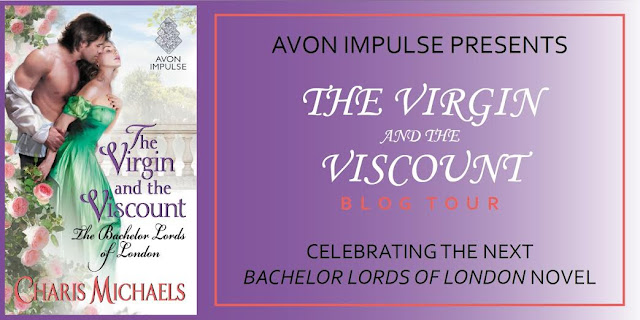 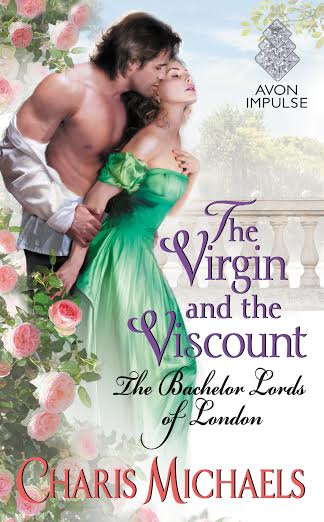 I loved this story. I cannot wait to read more by Charis
Michaels. This story is well written, so much so that it had
me laughing and in tears at times. (so keep those tissues
ready) I loved all the characters in this book. I have to say
I wish there was a Lady Elisabeth today running her
foundation. She is truly a wonderful woman and wish she
was really around. I could see helping her rescue her girls.
What a worthy cause that would be. But what brought her
there was something that had me in tears. She has had a
rough beginning, but so has the Viscount. Bryson’s parents
were the most horrible people, I truly understand why he
wished he’s father dead. Any man the dose that to his kid
deserves to rot in hell for what he did. Unfortunately this
made he want to be perfect and does not see that he does
not have to live without love. And another life altering
moment leads him to see what it is to truly be loved. But will
it be in time to reclaim his Elisabeth, or will he lose her
forever. I so cannot wait to read book three.

Now before I ruin this for you I will leave off here.  I hope you
enjoy this book as much as I did. If you do like this book,
please consider leaving a review. The Authors really like it
when you do; they value your opinions too

THE VIRGIN
Lady Elisabeth Hamilton-Baythes has a painful secret. At
fifteen, she was abducted by highwaymen and sold to a
brothel. But two days later, she was rescued by a young
lord, a man she’s never forgotten. Now, she’s devoted
herself to save other innocents from a similar fate.

THE VISCOUNT
Bryson Courtland, Viscount Rainsleigh never breaks the
rules. Well, once, but that was a long time ago. He’s finally
escaped his unhappy past to become one of the wealthiest
nobleman in Britain. The last thing he needs to complete his
ideal life? A perfectly proper wife.

When Bryson meets Elisabeth, he sees only a flawless
candidate for his future wife. But a distant memory calls to
him every time he’s with her. Elisabeth knows she’s not the
wife Bryson needs, and he is the only person who has the
power to reveal her secret. But neither of them can resist the
devastating pull of attraction and as the truth comes to life,
they must discover that an improper love is the truest of all.

The Bachelor Lords of London

Three men, two titles, one quiet street.
Will London ever be the same? 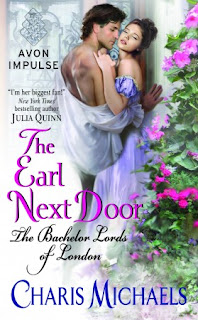 THE EXILE: Lord Trevor, newly returned from parts unknown.
Back in London to claim an earldom and disappear again.

The Earl Next Door (The Bachelor Lords of London, #1) 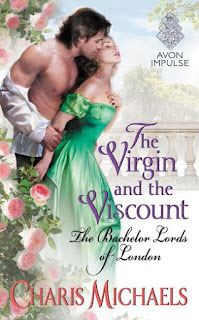 THE PARAGON: Lord Bryson, disgraced viscount, rebuilding
his life. In search of a viscountess, discreet and pure,
a model of propriety. A proper, perfect wife.

The Virgin and the Viscount (The Bachelor Lords of London, #2) 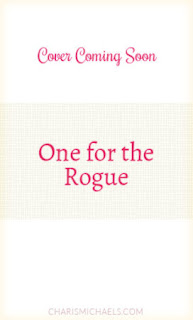 THE SCOUNDREL: Lord Beau, a naval officer and rakish
second son. His brother’s title has landed in his lap, and he’ll
do whatever it takes to prove he’s unfit to be a titled lord

One For The Rouge (The Bachelor Lords of London, #3)

On April 12, 1809, Franklin “Frankie” Courtland, 6th Viscount Rainsleigh, tripped on a root in the bottom of a riverbed and drowned.  He was drunk at the time, picnicking with friends on the banks of the River Wylye.  According an account later given to the magistrate, his lordship simply fell over, bumped into a fallen log, and sank.
It was there he remained—“enjoying the cool,” or so his friends believed—until he became too heavy, too slippery, and, alas, too dead to revive.  But they did dislodge him; and after that, they claimed he floated to the surface, bobbed several times, and then gently glided downstream.  He was later found just before sunset, face down and bloated (in life, as also in death), beached on a pebble shoal near Codford.
At the time the elder Courtland was sinking to the bottom of the river, his son and heir, Bryson was hunched over a desk in the offices of his fledgling shipping company, waiting for the very moment his father would die.  It had been an exceedingly long, progressively humiliating wait.  Years long—nay, decades.
Luckily for Bryson, for his ships and his future, he was capable of doing more things at once than wait, and while his father drank and debauched his way through all respectability and life, Bryson worked.
It was an unthinkable thing for a young heir and nobleman—to “work”—but Bryson was given little choice, considering the impoverished state of the Rainsleigh crest.  He was scarcely eleven years of age when he made first foray into labor, and not so many years after, into private enterprise.  His life in work had not ceased since.  On the rare occasion that he didn’t work, he studied.
With his meager earnings (he began by punting boats on the very river in which his father later drowned), he made meager investments.  These investments reaped small gains—first in shares in the punting station; later in property along the water; later still, in other industry up and down the river.
Bryon lived modestly, worked ceaselessly, and spared only enough to pay his way through Cambridge, bring up his brother, and see him educated him, as well.   Every guinea earned was reinvested.  He repeated the process again and again, a little less meagerly each time ‘round.
By the time the elder viscount’s self-destructive lifestyle wrought his river- and drink-soaked end, Bryson had managed to accrue a small fortune, launch a company that built and sailed ships, and construct an elaborate plan for what he would do when his father finally cocked up his toes and died.
When at last that day came, Bryson had but one complaint: it took fifty-two hours for the constable to find him.  He was a viscount for two days before anyone, including himself, even knew it.
But two days was a trifle compared to a lifetime of waiting.  And on the day he learned of his inheritance—nay, the very hour—he launched his long awaited plan.
By three o’clock on the fourth day, he’d razed the rotting, reeking east wing of the family estate in Wiltshire to the ground.
Within the week, he’d extracted his mother from the west wing and shipped her and a contingent of discreet caregivers to a villa in Spain.
Within the month, he’d sold every stick of furniture, every remaining fork and dish, every sweat-soaked toga and opium-tinged gown.  He burned the drapes, burned the rugs, burned the tapestries.  He delivered the half-starved horses and the fighting dogs to an agricultural college and pensioned off the remaining staff.
By the six-week mark, he’d unloaded the London townhome—sold at auction to the highest bidder—and with it, the broken-down carriage, his father’s dusty arsenal, what was left of the wine stores, and all the lurid art.
It was a whirlwind evacuation, a gutting, really, and no one among polite society had ever witnessed a son or heir take such absolute control and haul away so much family or property quite so fast.
But no one among polite society was acquainted with Bryson Anders Courtland, the new Viscount Rainsleigh.
And no one understood that it was not so much an ending as it was an entirely fresh start.  Once the tearing down ceased, the rebuilding could begin. New viscountsy, new money, new respect, new life.
It was an enterprise into which Bryson threw himself like no other. Unlike all others, however, he could only do so much, one man, alone. For this, he would require another.  A partner.   Someone with whom he could work together towards a common goal.  A collaborator who emulated his precise, immaculate manner. A matriarch, discreet and pure. A paragon of propriety.  A viscountess.  A proper, perfect wife.

Charis Michaels is thrilled to be making her debut with Avon
Impulse. Prior to writing romance, she studied Journalism at
Texas A&M and managed PR for a trade association. She
has also worked as a tour guide at Disney World, harvested
peaches on her family’s farm, and entertained children as
the “Story Godmother” at birthday parties. She has lived in
Texas, Florida, and London, England. She now makes her
home in the Washington, D.C.-metro area.