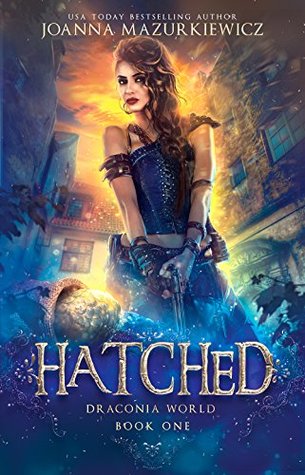 When a world of magic is the only thing you know,
what do you do when it’s gone?

In the dark city of Draconia, ruled by powerful mages, the only
thing that matters is magic, and Fran is on the search. She’s caught
the attention of some unsavory types. It doesn’t help that she has
the most powerful magical object in the kingdom in her possession;
an object many men have died to hold: a dragon’s egg.

Trapped down a dark alley, with the threat of death coming ever
nearer, a crack forms in the wall allowing Fran a way of escape to a
place she’d only heard tales of. But will it be one that she regrets?
She’ll enter a whole new world, but the threat of Draconia and the
mages isn’t far behind.

They want what she has, and nothing will stop
them – not even a non-magical place.

Oh my gods what a book! But arrggh I hate cliffhangers. Only
for a book by Joanna would I put up with them. Her books
are always so well-written and thought out. I am hooked on
her books.

This book is about Francesca and her dragon egg. And how
she ended up in our world. Now she is trying to get home but
things keep happening to stop her. She has Nicholas to help
or hinder her. I am not quite sure about Idris though, she has
strong feelings for both but mostly it is Arviana she is
concerned with. And who can talk to her from inside her egg.
she loves Francesca so much she latched onto her the
moment she stole her egg.  Will she make it home before
the egg hatches? Read and find out. You are going to love
this new series!