One life, one mate.That is the rule for Lycans, and after
waiting for over a thousand years, Nicholas Konstantine has
finally found his. But Kristen O'Connor doesn't know she is a
Lycan. He wants to claim her, but she's scared. Will they face
everything together, or will her fears be stronger than their
love?

Return of the Lycan King: Book 1: Nicholas and Kristen


Series:
Return of the Lycan King 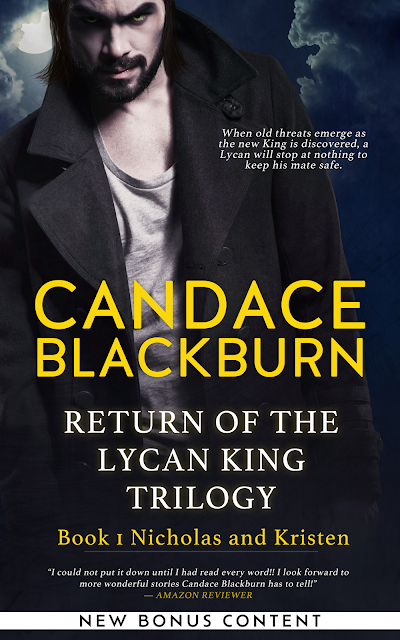 One life, one mate. Nicholas Konstantine has been waiting
over a thousand years for his mate. But when he finds her,
she's completely unaware of her Lycan biology, and she's
battling her own personal demons.

Kristen O'Connor is a recovering addict, with some major
trust issues. By not letting anyone get close, she won't get
hurt. Yet after one meetiing with Nicholas, her walls are
crumbling, and she wants more with this man.

But Nicholas reveals his Lycan side, and hers as well. In
addition, ghosts from both of their pasts come back to haunt
them. Will they face everything together, or will Kristen's
fears be stronger than her love?

Well I normally write my review as soon as I finish a book,
but this boo had me speechless. So I had to think. This was
an amazing book I would go as far as to say it was
phenomenal. This book is well-written and so thought out,
with such a flow it was hard to put down and has me wanting
book two now.

This part is Kristen and Nicholas's story. Kristen is human or
so she believes, she is determined to make it on her own
which leads her to donate her blood and when she dose
Nicholas knows she is his mate. Only he has to take it slow
with her, he has waited a long time for her. And now he has
her till someone from her past threatens to take it all from
her. And her brother is a big help but they are both in for
surprises. You will not believe who he turns out to be and
who the big bad wolf is in this story.(yes pun intended).

"No." Repeating the word over and over, as if that would negate the
reality, Kristen walked to the bathroom and turned on the lights. The
fluorescent bulbs weren't needed to highlight what was there. Her pupils
were, indeed, a deep yellow. The color was framed by her thickened
eyebrows. She swung her hair around and...dear God. Her hair was at least a
foot longer than it had been that very morning. Her fingers shook as she
held a thick section of red hair.

All she saw were the claws.

The scream was primal and Kristen sobbed as she sank to the floor. Nicholas
was there instantly, wrapping his arms around her.

"What is happening to me?"

He rocked her back and forth, rubbing her back in circular motions. "Your
body is going through a change."

"No shit, Nicholas. But why me? God almighty, I'm waving the freak flag
high enough as it is. Now I'm part animal?" She held her arms in front of
her face. "I've got fucking claws!"

"You're incredibly beautiful. Even now, with all the things that are
disturbing you so badly." "They aren't disturbing to you? You spent the night fucking a Lycan, werewolf, whatever and you're perfectly calm." The sobs slowed as she turned to look at him. "Why is that, Nicholas?" "Because," he said as he held out his hand. Kristen gasped as claws extended from his finger tips. "I'm a Lycan too."

Copyright © 2018 Return of the Lycan King: Book 1 Nicholas and Kristen by Candace Blackburn

Candace makes her home in North Carolina with her high
school sweetheart husband and their two sons. She's an
indie author who has published two previous romances (with
a bit of fantasy in each), Tristan's Redemption and Nate's
Forgiveness. Her current works are all paranormal romance
(her favorite genre to read!) and are set in her home state.
She loves coffee, cold weather, the Boston Red Sox,
theCarolina Panthers, and hearing from fans.

Candace is offering one lucky winner a Sterling Silver
Bracelet with a Citrine Charm and a second lucky winner a
$25 Amazon Gift Card! To enter, simply fill out the
Rafflecopter below: