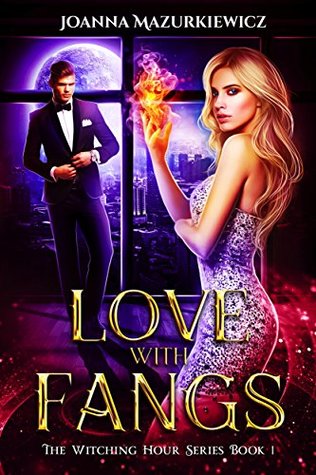 When the prey becomes the hunter… As a half-elf paranormal
recruitment consultant, Julia knows to stay away from vampires–
to them, she’s just food. So why would bloodthirsty alpha
male Nathaniel La Caz be any different. When she turns up to the
meeting in his factory, she senses that there is something about
him. Julia is suddenly overwhelmed by her senses and her magic
goes haywire when she is near him.

Things go from weird to worst, when Julia witnesses the
kidnapping of her cousin Claudia. And when more elves and fairies
begin to vanish without a trace, and no help in sight, Julia
knows that she is her cousin’s only hope. The police suspect
vampires. And if they’re right, this could be a one day death trap.
But Julia is willing to risk it all to save Claudia, even if it means
she  could become this crazed vampire’s next victim.


Author's Note: Love with Fangs was previously published as £6.19
per Witching Hour and was part of the series called Paranormal
Personnel Saga.

Arrg I hate cliffhangers. Now that said that was an amazing
book! It was so well-written and thought out. I love this new
series and cannot wait for the next book.

This is Julia's story. She is a half elf who has caught the
attention of a vampire and is trying not to fall for him, But it is
really hard not to. When her cousin is kidnapped right in
front of her she goes on a mission to find out what happened
to her. Even when her dad tells her, to stay out of it and let
him so his job. As her dad is the lead cop on the paranormal
unit. But things keep happening to her and you will be so
shocked when you find out who was behind it and who was
helping the bad guys. As well as her ex keeps popping up
causing problems. And man she is tough with all that
happens to her she just shrugs it of and her current
boyfriend can’t seem to see she is okay and dose something
stupid.