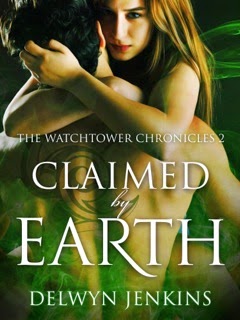 ~*~*~My Review ~*~*~
Omg That was an Awesome book. It was even better than book one.
I did not think it possible, But Delwyn Jenkins has an amazing talent for telling a story.
I can not wait for the next book. This is by far my favorite book of Paranormal Romance this year.
Ha ha I know were only talking a few days of the new Year, but I did finish the book on New Years eve.
So I’ll rephrase it This is the best book I read in Paranormal romance in 2014. And so ready to dig into the next book
which we get a peek at who it will be about at the end of Claimed by Earth. I love that in this book our hero Sebastian is so sweet,
caring and thoughtful of Maych’s feelings. We all know from book one she does not like to be touched
and In this book we find out the horrifying reason why. And then we get to celebrate
the fact that it will never hurt her again near the end of the book. But Sebastian knows he as to take it slow with her and eventually
he will win her love, because h is already in love with her.
But he knows it is to soon to tell her and just takes care of her.
What a wonderful love story this was. I so can’t wait for more from Delwyn jenkins
This book is a must read. I may even read it again.

Mycah Dunleavy has two goals in life: to protect her friends and to defend the World Below.
In order to take her fight to the enemy she must become the most powerful witch she can be. But that power comes at a price.
In fulfilling her first goal, she committed the cardinal sin of using her magic to harm others.
And to attain the second, she must combine in a ritual with a Watchtower Knight … despite the fact she can't bear to be touched.
Undaunted by Mycah’s defensive armor, Sebastian wants to claim her as his own and he intends to woo her long and slow.
Then Mycah comes up with a crazy plan to gain more power and he becomes nothing
more than a means to an end—a role he has no intention of accepting without a fight.
But there are bigger threats to deal with in the World Between. Mycah's life is threatened,
four Witches are kidnapped, and once again the enemy is knocking at the door.
Time is running out, and if Sebastian and Mycah don't find a way to work together, both of their worlds could be lost.

Sebastian was quietly enjoying the sensation of lying beside Mycah,
even though they were both fully dressed. His satisfaction lasted right up
until his earth Witch raised herself on one elbow to look at him. "I want to try again," she said quietly.
"Try what?"

He held his silence for a moment. Mycah seemed fine but he was under no illusions
about how deeply she was effected by last night’s attack. However he also knew that Mycah wasn't really offering a kiss,
she was offering her trust and that was something he would never refuse.
Rolling onto his back Bas pulled the pillow under his head and then patted his chest. "Come up here."
Mycah pulled back and look at him with predictable suspicion. "Why? What's wrong with lying as we are?"
Plenty. Sebastian knew that once they started kissing he'd want to pull her closer.
He'd become so desperate to feel her under him that he'd roll on top of her and he didn't want to risk scaring her.
"Don't argue with me, Red. You want to kiss, you do it my way."
"Asshole." She grumbled, but it didn't stop her moving closer to lean on his chest,
her arms braced to take her weight, her hips still firmly on the floor.
Bas knew that wouldn't be enough for him once he felt the touch of her lips.
So he pushed, risking her temper now rather than risking her fear later. "You need to climb a little higher."

"Think of me more as a mattress than a leaning post."
Mycah frowned at him but he kept his expression bland even though he was sweating,
his muscles tight and his gut burning with need. If he didn't have full body contact with his
Witch from the first moment, he'd lose his head and try to claim it.
Mycah's mouth turned down at the corners. "You want me to lie on top of you?"

She squirmed. "Don't you think that's a bit...intimate?"
That shocked a huff of laughter out of him. "Mycah you're about to have your tongue inside my mouth. It's already intimate."
"I know, it's just..." Her gaze slid away and she focused on a point just beyond his shoulder. "I need to ease into it."
"This is me easing." Resting his arms by his sides, Bas raised a challenging brow. "Let's go Red, I haven't got all night."
"Jeez, romantic much?" Mycah grumbled, climbing over him despite her reticence.
She rested over but not on his body, her hands and knees taking her weight.
Her eyes were a little wild and Bas figured he'd pushed her about as far as she was ready to go.
Taking a deep breath, filling his lungs with the scent of vanilla and wildflowers that clung to Mycah's skin,
Sebastian forced himself to relax. Mycah wriggled higher and once again they were nose to nose.
Then she leaned forward and touched her lips to his. Soft. Tentative. Bas responded,
meeting her touch without taking over the kiss, letting her set the pace.
Reluctantly he released her hair and put his hands on his pillow to grab a fist-full of linen rather than a fist-full of Witch.
The touch of Mycah's mouth grew firmer and the first time she licked at his lips Sebastian's toes curled.
Then she nibbled, using a soft bite to encourage him to give her access. He opened his mouth and her quick possession set his whole body on fire.
Sealing her lips to his, she stroked him with her tongue, sweeping in and claiming him body and soul.

She didn't know it yet - and she certainly wasn't ready for it - but as far as Bas was concerned this kiss was a brand.

His earth Witch had claimed him now and he was never letting her go. 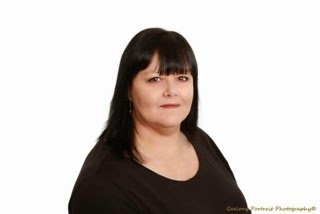 I like radical career changes. After serving in the Australian Navy for ten years (and being exceptionally disciplined)
I switched to a full-time university Arts student (where getting out of bed before 11am proved traumatic).
I’ve worked as a teacher, an editor, and now I write full time - a career I plan to stick with for as long as anyone wants to read my stories.
I’m an avid reader and movie-goer, an amateur bellydancer, and a disinterested cook.
I live on the beautiful south-east coast of Australia where the changeable weather suits my mercurial nature.
I writespicy paranormal romance as Delwyn Jenkins and I also write erotic romance under the pen-name DJ Michaels.
I love hearing from readers, so here are my social media links.