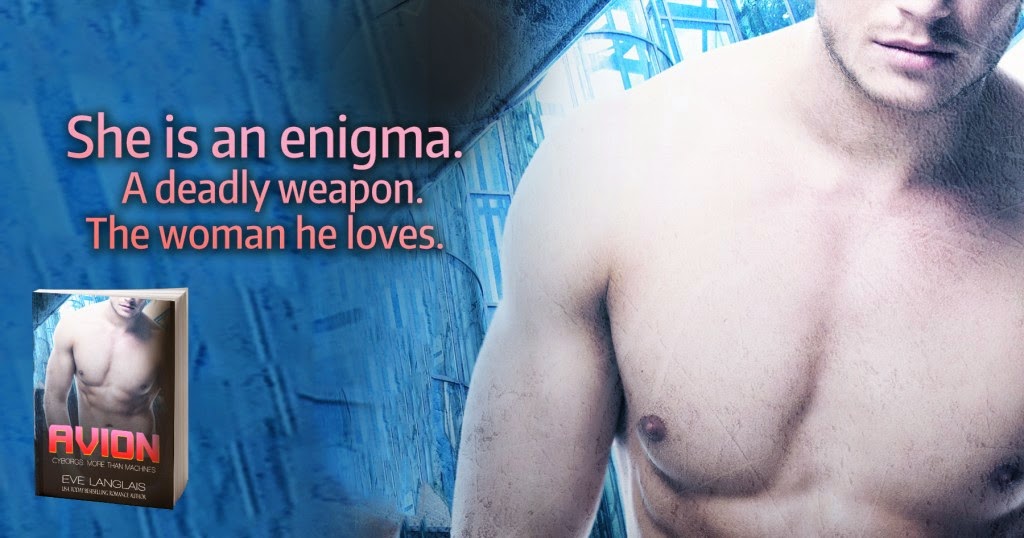 Being a cyborg was so much better when all his parts worked. Avion’s nanotechnology stopped functioning after some experimentation done on him by the military. They broke him and now, Avion is no better than a human, even more annoying, he’s dying.
But at least he completed his final mission. He saved, One.
Mysterious and alluring, Avion isn’t the only person who wonders what surprises this woman hides. The human military and their alien allies fear what she’s capable of and will stop at nothing to destroy her. However, the one thing they didn’t take into account is that the cyborgs always protect their own, and they aren’t afraid to use deadly force.
And no one could imagine the depths One will stoop to in order to protect the man she loves.
The Cyborgs: More Than Machines books can be read as stand alone stories, however, for total reader enjoyment it is recommended you read them in order.

“You need another name. We can’t keep calling you One.”
“Why not? Does someone else bear the name causing possible identity confusion?”
“No.”
“Then what is the issue?”
She asked so seriously. Did she not see the problem? “It’s not your true name. It’s the name they gave you when they took your rights away. When they relegated you to only a unit digit. Someone without a face or feelings. A numerical designation is what they call a slave.”
“Then my name is apt.” So quietly said, and yet no mistaking it.
Her timid acceptance angered him. “You’re not a prisoner anymore. You don’t have to listen to the military or the doctors. You can make your own decisions now.”
“The question is, should I? Perhaps they know best. I have shown myself to be imperfect. My powers are ungovernable.”
“I don’t believe that.” More like the military didn’t know how to control her and thus gain access to her powers. “I think you’re more in charge than you realize.” You belong to yourself.
Her panic hammered him.
I make bad choices. I hurt things. Kill. Bad. Bad. Bad.
We all do things, vixen. Things we’re not proud of. Things so we can survive. He would know. He’d done things he wasn’t proud of, but would do again.
The tension in her proved visible in the tight way she gripped his hand. Almost tight enough to crush. We will change the subject. I do not wish to dissect this aspect of my history.
“Fine. We won’t talk about you, but we are going to do something about your name. I, for one, refuse to call you by a digit.”
“Ditto,” said Seth.
“So that’s two of us already outvoting your insistence on keeping it.”
“I thought I was free to make my own choices. Perhaps I shall choose to keep it.”
So pertly said, Avion couldn’t help but grin. “I wouldn’t recommend it. I can almost guarantee if you don’t choose something better then you could end up with something awful to match your stubborn nature, like donkey-girl-arina.”
“That has too many syllables for casual pronunciation. I don’t think you’ll use it.”
How confident she sounded. He couldn’t help but chuckle. “Touché, vixen.”
“Why do you keep calling me that? I am not related at all to the Canidae family.”
“No, but you are sleek. Tricky. And I’m going to wager foxy too.”
“Ah, Avion, you made the poor girl blush,” Seth said in an ah-isn’t-that-cute voice.
“Do not mock me,” she warned quietly.
Avion squeezed her hand. “Calm down, vixen. Seth’s just teasing. It’s what he does. Trust me when I say we’ve all battled the urge to throttle him.”
“I’d rip out his tongue,” she advised.
“Good plan. But we can’t act on it. For one, his wife is the deadliest woman I know, after you of course,” he said with a laugh, stroking the back of her hand.
“Is there another reason why I cannot twist his head until it pops off? I did that with a doll many years ago, and the doctors found it so interesting. I can only imagine their reaction if I did it to a living thing.”
“I really hope you’re joking,” Seth mumbled.
“You got my jest!” She seemed so pleased. Meanwhile, Seth sighed in relief, and even Avion felt some tension loosening.
His lady had some rough edges when it came to interacting with others.
“The other reason we can’t sit on Seth and shave his head, turning him into a comatose idiot until it grows back, is because he’s an excellent ally, and we don’t kill our allies.”
“No matter how annoying?” she groused.
“Even if he’s insufferable.”
“Feeling the love over here,” was Seth’s dry reply. “You should be nicer to me, Avion. I’m the one with the morphine that will turn that frown upside down.”
Drugs for the pain, which, while held somewhat at bay by his interaction with his vixen, still throbbed at the periphery of his senses.
The feathery touch of her hand trailed across his brow.
“Why do you insist on lying here?” Her tone seemed genuinely puzzled. My bio sensors say you are not repairing the damage to your tissues.
Could she not feel his lack, the dead bots floating like flotsam in his vessels? “I am dying.”
“Dying from what? Your wounds are not so grievous. They should heal. Although”—she palpated the area, and he bit his inner cheek lest he scream in a very unmanly fashion—“there is no reconstruction happening. Why are your nanotechs not repairing?”
“My nanos are dead.”
He didn’t see it, but he could hear the sucked-in breath of her shock. “Impossible.”
“Apparently not. The human scientists found a way to shut mine off, and without them…” He trailed off. No need to state the obvious.
Soft, yet deft hands palpated him more thoroughly. Was it wrong that in spite of his injuries he felt a thrill at her touch?
“How did they shut them off? I’ve never heard of this achievement.”
“No idea. They detained me months ago in a top-secret facility buried in an asteroid. The military and their science minions did so many things to me while I was their guest.” Most of those things unpleasant. “One of their experiments resulted in what you see. A cure for cyborgism.”
“It is not a cure. Your systems are failing. You should reboot.”
“I can’t. Without active nanos, nothing mechanical works.”
“So we must reanimate the dead bots. You need fresh blood with active nanotech.”
Avion shook his head. “It’s been tried. The bots die as soon as they leave our body and stay that way even if reintroduced to a body with the technology.”
“That is because they are not the original. Copies cannot create.” Imperiously said.

Have a question?
Want to say hi?
Please address inquiries to
eve@evelanglais.com