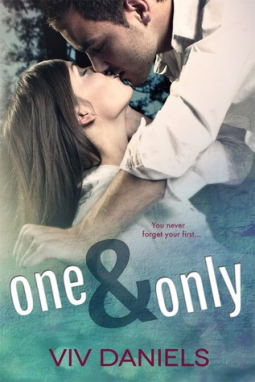 What a book! this was a wonderful story of first love, loss and finding each other again. And a young girl who is held under control by her fathers secret. I felt so bad for Tess, she has put up with a lot in her life and when she finally gets a break her day snatches away form her. Then she meets Dylan, a wonderful guy who loves Tess unconditionally. But Tess knows she will never be able to have him as he is going to a different school so after a wonderful night together she just stops all communication with him. Then 2 years latter now they are back at the same school. It seems neither of them has been able too forget their time together. There is just one problem he has a girlfriend and gets the shock of her life when she sees who it is. One can only hope they can find their way back together, with all the rules and obstacles between them.
I hope there is going to be another book About Tess and DylanI'd love to know how they are doing after all they went through and if they will be able to stay together happily ever after forever.
I hope you enjoy this book as Much as I did.
If you do like this book, please consider leaving a review.
The Authors really like it when you do, they value your opinions too.

One night they can't forget... Tess McMann lives her life according to the secrets she's sworn to keep: the father who won't acknowledge her, the sister who doesn't know she exists, and the mother who's content playing mistress to a prominent businessman. When she meets the distractingly cute Dylan Kingsley at a prestigious summer program and falls in love, Tess allows herself to imagine a life beyond these secrets. But when summer ends, so does their relationship—Dylan heads off to Canton College while Tess enrolls at the state university. One love they can't ignore... Two years later, a scholarship brings Tess to Canton and back into Dylan's life. Their attraction is as strong as ever, but Dylan has a girlfriend…who also happens to be Tess's legitimate half-sister. Tess refuses to follow in her mother's footsteps, which leaves her only one choice: break the rules she’s always followed, or allow Dylan to slip away for a second time. ...And only one chance to get things right.

Hannah Swift has spent most of her life playing the part of
perfect daughter: going to the right school, dating the right
boys, saying the right things. And where did it get her? Her
father has a secret family, her grades are in the toilet and her
perfect boyfriend left her… for her own half-sister. But even
running away to Europe for six months doesn’t help Hannah
put a lifetime of lies in the past.

Now it’s time to get wild…

As soon as she returns home, her wealthy, image-obsessed
parents are determined to shove her back in their mold of
tedious society parties and dates that feel more like
corporate mergers. Well, Hannah’s having none of it. Instead,
she goes after Boone, a drop-dead gorgeous bad boy from
the wrong side of the tracks. He’s exactly the kind of guy
who will drive her family insane,
and he seems more than happy to do so.
Yet underneath the beat-up pickup truck and well-worn jeans,
Boone has secrets of his own. Hannah’s had enough of lies.
What will she do when she finds out about his?

Viv Daniels writes love stories for the young and young at heart.
Like many of her characters, she met her husband in college, and
knows all the ins and outs of navigating that kind of relationship --
from how to date when you're both flat broke to how to fit two
people in narrow dorm room bed.
Her favorite new adult authors include Tammara Weber and Sarina Bowen.

Viv can usually be found on her Facebook page or Twitter feed,
chatting with readers about her favorite New Adult fiction, or
sharing pictures of cute boys.