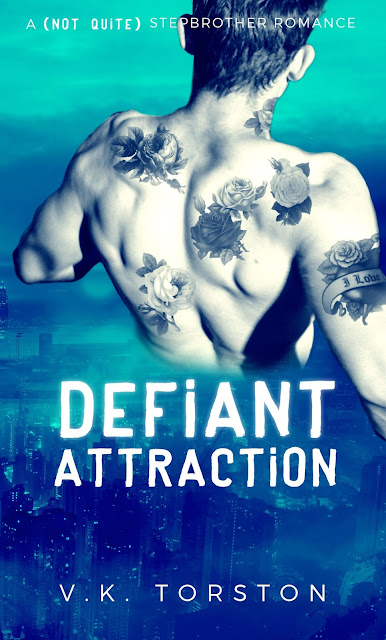 Dan might be the enemy of my enemy, but I’m not
sure that makes him my friend. He’s definitely not
my ‘step brother’, no matter what everyone at
school says. Honestly, I don’t know what he’s
supposed to be to me. Or what he’s becoming…

Fact: for every action, there is an equal
and opposite reaction.

In the yearbook, I’ll be Sophia Ramos:
Valedictorian. Years of honor roll certificates,
AP classes, and lugging around an obnoxiously
large cello case are about to finally pay off. If
everything goes according to plan, I’ll escape
these decaying suburbs for a top university across
the country.

The problem? A few years ago, my mom met
someone just as broke, just as drunk, and just as
impulsive as she is. Approximately five seconds
into their relationship, they decided it would be an
excellent idea for him—and his son, Dan—to
move in with us. (Spoiler alert: it wasn’t).

Now I share a house with none other than Daniel
Cole. Even though Dan dropped out two years
ago, he’s still the tattooed, bad boy, heartthrob,
legend of St. Anthony’s Academy. He and I aren’t
supposed to have anything in common.

Living together means war. First, Dan and I were
at war with each other. Now, our rivalry is giving
way to an unlikely alliance—two opposing sides
teaming up against a common enemy: our
respective parents.

Which is to say, we’ve been hanging out.

Question: What happens when an
unstoppable force meets an immovable
object?

Here’s the thing: My brain is a complex organ.
One hundred billion neurons, each with an
average of seven thousand synaptic connections
to other neurons. My brain is my ticket out of here.

My heart, by contrast, is a pump.
It moves blood around.

I know Dan is off-limits. I know I shouldn’t do
something I’ll regret. And I know how much is at
stake (my family, my future).

So why can’t I stop thinking about him? Those
inscrutable jade eyes. The smile that can say a
thousand different things at once. That tattoo
curving across his abs…

Even though I know better, I feel that pounding in
my chest. And it’s getting harder to ignore.


But if I follow my heart, I can never go back.

Answer: There is no such thing as an
immovable object.

This was one hell of a book. This may be a contemporary but
it is so well-written and thought through. This is such a great
book. I so cannot wait to read more by V.K.

This book is about Sophia and Dan. They have been thrown
into a impossible situation. Thier parents never married but
everyone thinks they are brother and sister when they are
not. But somewhere along the way they fell for each other.
As I do not want to ruin this story as it is one you should read
I will be real vague. Let's say they have a few obstacles
including getting caught and it all blows up. Then they have
to find a way back to each other.

Twisting the tray from side to side breaks the ice with a satisfying crack. I've almost gone so far as to pour water into my glass before I stop. Memories from last night surface and I recall sitting up in bed picking popcorn out of my bra.

Dan is wearing elastic-waist pajamas. I can see the edge of his boxer-briefs peeking out of the top but their waistline is much the same scenario. Everything has been so relaxed today. He's perfectly content—humming to himself!—while he finishes scrubbing the sink. He would never see it coming.

I pad softly across the linoleum, careful not to make a sound. The glass of ice waits poised in my hand. Dan finishes rinsing the sponge. In one fell swoop I wrench back a handful of pajama-and-boxer and let loose a frozen torrent.

Dan jumps, surprised, but he’s still reacting more to the grabbing than anything. While he knows something has happened, he doesn't yet know what.

I can't contain my devious grin while he searches my face. Then—there it is. A yelp, a jump, a shake. Cube after freezing cube tumbles from his pant legs. More yet are trapped inside his underwear. He hops from foot to foot and tries to push them out. Then he changes strategy.

“No!” I squeal, giggling wildly, and tear out of the kitchen.

I circle the table and he pauses just across its diameter. I try to feint left. He jerks then corrects his course and lunges. I backtrack.

We're stuck in a dead heat. A draw. One of us will have to make a break for it.

Throwing caution into the wind, I take off away from the table and leap over the couch. He struggles to follow my maneuver. Probably something to do with the glassful of ice melting in his underwear. I can't stop shrieking like a child and waving my hands like an idiot. If I don't make it to my room, he's going to tickle the fuck out of me.

My heart leaps as I crash through my door and tug it closed behind me. It stops short of snapping shut. One tattooed arm pries it open.

I jump back and seize a pillow from my bed like a shield. “No!”

Then the tickle-fingers. Just the sight of them breaks something inside me and I start laughing so hard I can’t breathe. Once, twice, three times I whack him with my pillow. He yanks it away and I trip backward onto my bed.

We land hard and he quickly takes both the figurative and literal upper hand. One knee wedges between my legs to keep me from kicking. His hands snatch my wrists in turn, pinning them above my head.

Dead heat. Stalemate. My armpits are terribly exposed but he can't tickle me as long as he's holding me down. My chest rises and falls as fast as my heartbeat. Desperate laughs push through my tight-pressed lips.

This close, his face a spare few inches from mine, I notice a field of freckles for the very first time. Light, almost invisible, they dust his nose and cheeks. Freckles don't seem like something Dan should have.

The lunatic laughter dies in my throat but my chest still rises and falls. A muscle in his jaw works. Green eyes dart rapidly between mine, thinking. About what, I’m not sure.

His hands, coiled around my wrists. My breasts, curving against his chest. Our lips, inches apart. This is starting to look like…something.

Our eyes stay locked. The longer we remain like this, the more the next movement matters. The stakes are shooting up. Maybe, if I could move, I could just tickle him back...

His knee shifts a fraction, hardly anything at all. Or maybe I imagined it. A rush of heat flows between my legs—so strong and so sudden I'm sure he could feel it. The fabric is so thin it might as well be bare skin. Goosebumps erupt down my arms. My nipples pull to points against him. He must feel them too.

I've been staring into his eyes so long…however long this has been—an infinity— and I mark their swift change. Something has happened there. Some choice, some determination...

Some noise rises from my throat. I'm not even sure if it was a sound or just a feeling, but I sense how it changed me. The space between us starts to close.

V.K. Torston is a millennial and ‘cool aunt’ to a
brood of nieces and nephews. She was born and
raised in San Francisco, attended university in
New York City, and aspires to one day live in
London. A veteran of the independent music
scene, she began writing nonfiction in her late
teens. Then she realized that making up stories
was way more fun than coming up with endless
synonyms for ‘frenetic’ and ‘danceable.’ Her
hobbies include drinking too much coffee, making
up stupid songs, and ranting about current
events. Defiant Attraction is her first novel.