To Have and To Howl 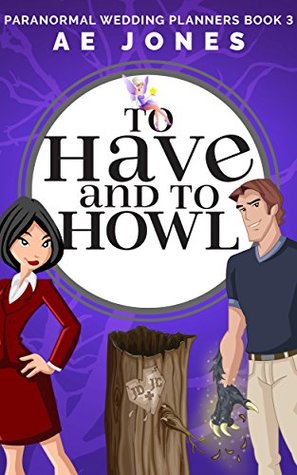 Julia Cole is a lawyer on a mission. After three long years, her
husband’s murderers have been convicted. Until their leader breaks
out of magically-strengthened, impossible-to-break-handcuffs in
the courtroom, that is. Someone is helping them. And that someone
is threatening Julia. But she will not back down from them or the
man tasked to protect her...a man who scrambles her long-buried
emotions.

Jack Dawson is a werewolf with a secret. One that could change his
life forever. But his problems have to take a back seat while he
protects Julia. He can’t afford to let down his guard—against the
evil forces threatening Julia, against his growing feelings for her,
fighting to be heard, and against his secret—which could destroy
everything.

Can Julia and Jack finally let go of their pasts and begin a new
happy ever after together?


To Have and To Howl is the third book in the paranormal
wedding planners romance series. If you like romance with
a side order of mystery and a dash of humorous hijinks, then
you’ll love this series by Golden Heart® winner and
RITA® finalist AE Jones.

Holy freaking Gods that was good! This was even better than
the last two books. And that is really saying a lot. This book
is so well-written and so thought out. I just could not put it
down.

This is a standalone but I truly believe they should be read in
order to understand the back story. So don't just get this one.
Get them all you will thank me latter.

Now this book is Julia and Jack's story. But be forewarned
you will need tissues to get through this as it is an emotional
story to. Jack has fallen for Julia but he understands she is still not over her husband’s death. So he will wait, but he has
a secret he has been keeping from everyone and it is a big
one. When she is targeted by the supremacist he is
determined to keep her safe. But it may be him who needs
her more. Let's hope the wake up and see what everyone
else can in time.

Love and law are not so different in their pursuit of truth.
Chapter 1
Julia Cole entered the empty Tribunal chamber, her heart pounding in sync with the staccato click of her heels on the stone floor. She hesitated at the front of the gallery, resisting the urge to walk those few extra steps to the prosecutor’s table.
She wasn’t used to sitting in the audience when a trial took place, and if she had been able to convince the magistrates, she would have been prosecuting this case. But the magistrates shot down her request immediately. Not because she was a human wanting to try a supernatural case, or because she was normally a defense attorney, but instead they cited conflict of interest. Her husband was one of the victims. In her head, she knew they were right, but her heart was still kicking and screaming about it.
Today would not be a fun day. But then, fun had not been seen or had for a while now. Determination—yes. Single-mindedness—most definitely. Anger…well, anger had become her constant companion.
Julia sat in the front row and closed her eyes. She had been sitting in this same seat throughout the final week of the trial, absorbing every nuance, and staring the accused supernatural supremacist in the eyes. She would not be cowed. And since Thomas could not be here, she would be his representative, his presence, his voice. She would not allow her husband’s message of tolerance to be silenced.
Today was the day. The verdict would be announced. And all the victims and their families would receive justice. There could be no other outcome.
The room filled up quickly. Throughout the trial, the magistrates had kept the chamber closed unless someone was called to testify or, in Julia’s case, petitioned to attend. Now people crowded the benches and lined the sides of the gallery.
Jonathan Godfrey, the prosecutor, entered the chamber and nodded to her. He was a powerful foe in the courtroom, but in this instance, he had carefully considered her input and insights from the beginning.
Thomas’s brother, Devin, arrived with his wife, Alex, who sat down next to Julia and squeezed her hand. Filing in behind them were Devin’s teammates, the men who helped capture and bring the supremacists to trial.
She looked back at the four men and acknowledged each in turn, Charlie, Giz, and the twins, Connor and Jack. Jack had almost lost his life in the pursuit. She owed him and all of them for what they had been willing to sacrifice for this case. Even Alex was kidnapped and threatened. Julia wasn’t sure if anyone would ever know the full extent of the crimes committed by these bastards.
And speaking of bastards—Tobin, the leader of the supernatural supremacists, swaggered into the room between two guards, his hands secured in glowing handcuffs. The supremacist gang had elected him as their representative in court. Why, Julia had no idea, but she also didn’t understand why the idiots had followed him to begin with.
The room buzzed, anxiety jumping from person to person like static electricity. The guard at the front of the room gestured for them to rise. She stood with the rest of the crowd as the magistrates entered and sat at a raised bench in the front. There was no jury of your peers in supernatural court. Three magistrates heard the cases and rendered a decision.
The head magistrate raised his hand for silence and then motioned for everyone to take a seat. Julia pulled out her notes from the trial and the gold pen Thomas gave her. She gripped the pen so tightly she thought it might leave indentations in her fingers.
The head magistrate stood. “The case is concluded. In the matter of extortion, gunrunning, drug smuggling, kidnapping, attempted murder, and murder, we find Josiah Tobin and the Vipera gang guilty as charged.”
The room erupted into shouts and sobs.
Julia’s vision narrowed into a thin tunnel. The world tilted and went fuzzy…she shook her head hard, once, and deliberately slowed her breathing.
Had she heard the magistrate correctly? She turned to see Alex and Devin hugging beside her. It had actually happened. She wasn’t imagining things. She had dreamed of this so many times, the reality was hard to believe.
“Order!” the magistrate yelled as he slammed his hand on the bench and the sound vibrated through the room as if amplified by a speaker. The crowd settled down, and everyone took their seats again.
“Normally we would pronounce sentence immediately. However, in human courts of law, we understand that victims and their families are permitted to speak before sentencing. Prosecutor Godfrey has requested that this practice be followed here. We have decided to allow his request. The floor is yours.”
Godfrey cleared his throat. “Thank you, your honors. Julia Cole has asked to speak on behalf of the victims.”
Julia blinked. She blew out a breath and then inhaled, imagining herself breathing into a paper bag. She and Godfrey talked about the possibility of this happening, but he wasn’t sure the magistrates would allow it. Now the time had come.


She could do this. Delivering closing remarks in a courtroom was second nature to her. She would speak for all the victims and their families today. Someone needed to be their voice, and she was more than ready to speak on their behalf.

In Sickness and In Elf (Paranormal Wedding Planners #1) 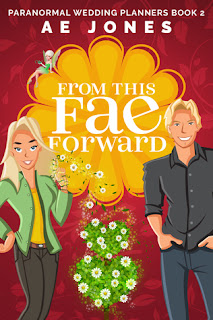 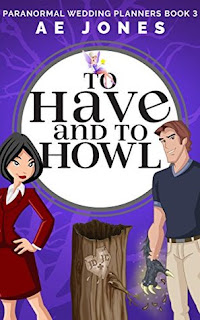 To Have and To Howl (Paranormal Wedding Planners #3)

Paranormal romance and urban fantasy author AE Jones
spends her nights weaving stories about all variation of
supernatural—their angst and their humor. After all, life is
about both…whether you sport fangs or not.

AE lives in Ohio surrounded by her eclectic family and
friends who in no way resemble any characters in her books.
Honest. Now her two cats are another story altogether.