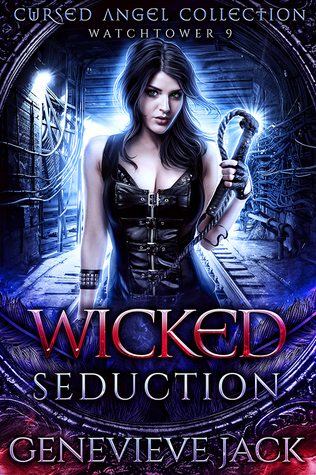 It’ll take a witchy woman to break a wicked curse!

Aria Tanglewood is a survivor. As the last witch living in a city
ruled by the demon of lust, her very existence is illegal. If it
weren’t for her deceased mother’s talisman concealing
her power and making her immune to the deadly curse
plaguing her city, there’d be a burning stake with her name
on it.

But when Aria’s sensual performance at the cabaret where
she works attracts the attention of a high-ranking demon,
flying under the radar is no longer an option. Forced into the
inner workings of an unholy empire, Aria soon discovers a
way to break the demon’s curse. Only problem is, the spell
requires her to complete two dangerous tasks: exercising the
power she’s always tried to hide… and finding the angel
who will either save her city or destroy her world.

Wow what a book! This was one hell of a story. Truly
amazingly well-written and thought out. This book is a new
series for me I so hope to read more. I loved the other series
by Genevieve Jack and cannot wait for more by her. And this
is a new world for Genevieve. There are 7 other books in the
series, by others that I plan to check out.

This story is about a young witch Aria Tangelwood. In this
world demons rule and witches are the enemy. So she must
hide what she is. Or risk being burned at the steak. When
she gains attention by the wrong demon she may be in for a
world of hurt. As being a witch is the least of her problems.
But one thing leads to another and she is given a vision
telling her to find the angel and save her world. Now she just
has to figure out how to do this. And if she dose how does
she continue on after. As a world without love is not worth
living in she is at a loss as to what to do.