Alpha Squad has received its very first assignment and
recruit Adam King is excited to jump head-first into the
action. When the team arrive in the shifter refugee camp
in Sevenoaks to investigate some attacks on the local
population, the evidence seems clear: the attacker they are
looking for is a shifter. And one in particular keeps popping
up in suspicious circumstances; Felicity Weir, who works in
the camp. There’s just one catch: Adam’s inner bear insists
that Felicity is his mate. Now, he’s torn. How can he help
make Alpha Squad’s first mission a success, when he
can’t endanger the woman who appears to be their prime suspect?

Bear shifter Felicity Weir has been looking after the shifter
refugees camping near Sevenoaks ever since they started
streaming in from Europe some months ago. She is
determined to serve, to help these displaced people build
a new home and future for themselves. Then the attacks
began and the mood in Sevenoaks grew more and more
hostile toward these newcomers, and by proxy, against her.
First it was livestock that turned up dead in the local villages,
soon after, human victims started to turn up. All the evidence
points toward the refugees, but Felicity cannot accept that
one of her kind would be capable of such violence. She has
no choice but to take matters into her hands and investigate
the deaths herself.

With Alpha Squad and the local police hot on their heels,
Felicity and Adam must join forces. Will they be able to prove
her innocence before public opinion is irreparably poisoned
against the shifters, and their chances for a happy future

Oh how I love books by Lorelei Moone. Now
I normally read books but since my friend got me
a subscription to audible I had to get this book.
The narrator Audrey Lusk, is amazing which only
enhances the book.

Now about the book: this story is about Adam.
If you read book one you'll know he is Eric's
brother. And this is how he met his mate Felicity.
The Alpha Squad is sent in to investigate a
murder believed to be done by a shifter. Adam
catches her scent and is compelled to give
chance. But when they are finely face to face they
are both speechless. There is one problem;
Felicity is suspected of the murders. So now it is
up to Adam to prove she is not to blame. But oh
man you will be so surprised at who is behind it.

Felicity wasn't sure what woke her up. It wasn't a noise, but a sensation or a presence. She blinked a few times and stared at the ceiling.

There it was again.

A tug in her chest which told her she wasn't alone.

It wasn't a bad feeling; it was reassuring and warm, like a cozy blanket to keep the cold out. A smile formed on her lips. It was Adam.

Felicity got up and made her way through the living room straight to the front door.

"Hi," she said, and opened the door wide.

She shook her head. "You came just at the right time."

Felicity stepped aside and watched him enter. There was something different about him now. He was a mess of feelings and thoughts, making it hard for Felicity to focus on any one of them.

"What's going on?" she asked. How did you know where I live? Of course, she didn't mind him turning up here, but that didn't make her less curious.

Adam turned and fiddled with his vest, retrieving a familiar looking notepad and holding it up in her direction.

"I got this off the detective," Adam said in a matter-of-fact tone.

Felicity took the notepad and studied it carefully. A rare glimpse into the inner workings of the mind of her main enemy on the police force. "You stole this?" she said. She wasn't even sure she wanted to know the exact circumstances under which he obtained it.

Adam shrugged. "Borrowed it. I was hoping to get insight into the police investigation. They're not exactly telling us anything."

Felicity frowned. "No? I thought Alpha Squad was collaborating with the police."

"Yeah, we thought so too. It's a rather one-sided affair."

If that was the case, then why was he here sharing the detective's notes with her and not with his team mates…?

There's something you're not telling me.

Felicity stepped up to him and rested her hand on his arm. What is it?

"I'm off the team. At least for now. The major wants to avoid any appearance of impropriety."

Felicity sank down onto the sofa, her hands tightening around the notepad. Now what?

Adam sat down next to her and took her hand. A jolt of electricity passed from his skin into hers; at least that was the nearest description to how it felt.

I'm so sorry. But no matter what, we'll figure things out together.

Felicity closed her eyes and tried to think. But all that achieved was to flood her mind with imagery of their kiss in the woods. How did shifter couples achieve anything at all, when the intense attraction between them overwhelmed everything else, even rational thought?

"I know it will." Adam wrapped his arm around her and held her close.

She could hear his heartbeat so clearly. How it had sped up the moment they touched and continued to hammer away at a feverish pace now that she was safely tucked in his embrace. Perhaps this was the right thing to do. Perhaps they owed it to themselves as well as each other to blow off some steam, so that they could dive into the investigation with renewed vigor and focus.

That was her justification to satisfy her mind anyway. Her heart and body didn't care to rationalize; they just wanted to act.

Adam sensed the change in her; of course he did. Such was their connection.

He scooped her up off the couch and carried her through the short hallway into the bedroom. It was a mess; the bed wasn't made and laundry was piled up on the chair that stood by the wardrobe. Felicity might have felt awkward about the state of the room with anyone else, but not with Adam. He hadn't even noticed it.

His eyes were fixed on hers. 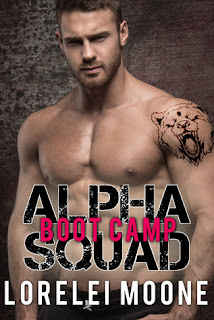 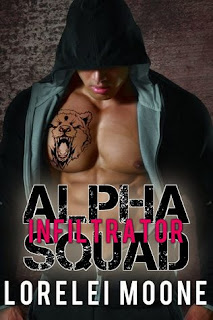 Lorelei Moone is an up-and-coming author of paranormal
romance based in London. A lover of all things sweet, and
caffeinated, when she’s not writing about sexy bear shifters
and their strong-willed curvaceous love interests, Lorelei can
be found baking cookies or cakes for her family.