A Knight of Her Own 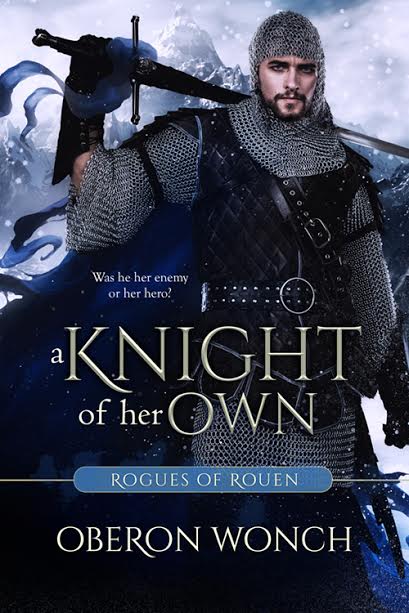 Sir Drogo LaForce has spent a lifetime chasing the family
honor and wealth denied him by his bastard birth. A clever
scheme to uncloak a traitor against the Crown finally
promises towin him everything he desires…Lady Isabel has
been in hiding ever since an evil Norman lord killed her father
and usurped her English lands. But her plot to avenge her
father and free her people is threatened when a mysterious
Norman knight abducts her with plans to use her for espionage.

Drogo’s fascinating captive is nothing like he anticipated.
Outspoken but innocent, Isabel reluctantly submits to Drogo’s
tutoring in the spymaster’s craft, as well as the art of making
love. But their potent attraction nearly leads to disaster. In the
end they must decide between their dueling appetites for
riches and revenge…or love.

Oh how I love a historical romance. And this one is truly
awesome.  This book is so wonderfully written. It has such
an elegant flow to it. This is my first book by Oberon Wonch.
But I do plan to read more by her.

This story is about Isabel or is she infamously known the
blue lady. Known to wither a man Nether region if he so treat
her wrong. The blue lady lives in the forest and is known to
prey on men. Then there is the night we not only capture her
but capture her heart as well. Not at first but eventually she
is overly and totally in love with him. He has taken a vow of
chastity, to a woman long gone. But not forgotten. And
Isabel doesn't know how to complete with a dead woman.
But the more Drago tries to teach her how to seduce the
enemy, the harder it is for him to keep his vow. They have to
take down this evil man he is responsible for her father’s
death and for trying to keep her so many years ago. What
he's done to her and everyone she loves deplorable. In the
end as Drago falls more in love with her will you be able to go
through with his plan. And the more she falls in love him she
seems there may be no other way but to go through with the
plan after all. Hopefully in that in the end they will be able to
be together. But it is an impossible match for she’s a Lady
and he is nothing but a knight. And a match for them is not
allowed. But fate has a funny way of interfering when we
least expect it.

“You know de Belleterre will be hosting his annual feast in a fortnight,” Leofric said.
Isabel shuddered. “Candlemas.”
The Holy Church called the traditional midwinter festival Candlemas. It was when they commemorated the Blessed Mother’s presentation of her baby Jesus at the Temple. When the priests blessed their candles, which symbolized God’s light in bleakest winter, and when farmers prayed for spring to return soon.
But de Belleterre put his own degenerate spin on things and called the feast Imbolc, in the manner of the pagan people who had dwelled here long before Isabel’s forefathers had arrived. He marked it with a week-long orgy of gluttony, fornicating, and the abuse of his peasants.
“He will be expected to entertain guests,” Leofric said.
She glanced between him and the Norman who had taken her captive. An uneasy realization dawned. “And you want me to be one of those guests.”
Leofric nodded and went on. “’Tis the only way we can learn what the earl’s traitorous plans are and whom he consorts with—especially William’s Danish foes. If we can learn names and locations, it would prove the earl’s treachery toward William, and he would be forced to arrest him.”
“You’re mad, both of you. De Belleterre won’t tell me anything.”
Leofric shot an uncertain glimpse toward LaForce. To Isabel, Leofric said. “Not at once. You will have to gain his favor. He must come to trust you and feel safe to speak intimately with you.” Her friend fell silent.
“Go on,” she said warily. “How am I to gain his favor?” And why was Leofric behaving so diffident?
“For the love of God, man.” LaForce impatiently stepped around her to insert himself into her field of vision. He faced her squarely. “You must seduce de Belleterre and win access to his bed. He must grow careless enough to—”
“Seduce him!” A wave of nausea assaulted her as she repeated the ugly words. She swallowed hard. Though she’d already plotted a marriage of convenience with the devil, conjugal relations with him were definitely not in the plan—she’d only intended to get close enough to ram a knife into the monster’s gullet.

DON'T MISS THE FIRST BOOK IN

THE ROGUES OF ROUEN SERIES!

Comte Gregoire FitzHenri, the new Earl of Shyleburgh, is
known for his prowess as one of the Norman conqueror's
most favored warriors...but not for his romantic sensibility or
his command of the English language. Gregoire looks
forward to his imminent marriage with his seneschal's
beautiful daughter, his longtime betrothed. But as a
rough-hewn soldier, he wishes to enchant the elegant lady
before taking their wedding vows-which means an
interpreter...and much-needed lessons in courtly love.


The clever Bridget of Shyleburgh has been secretly in love
with Gregoire since his visit as a dashing young
warrior-when he was promised in marriage to her sister.
But when he returns five years later as their new earl, Bridget
is tasked with translating for him-including his love letters
and somewhat awkward attempts to woo her sister. Mortified
at first, Bridget soon finds herself completely charmed by his
whispers of love and desire. She never expected such
tenderness...or such wicked temptation... from a man like
him. Gregoire's heated missives tempt a fair maiden to stray
down a path filled with forbidden pleasures.

But his words are meant for another... aren't they? 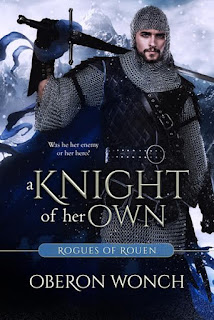 Oberon Wonch has engaged in a love affair with books for
as long as she can remember. Penning her own stories from
an early age, she later earned a degree in World Literature
while studying several languages—all in order to learn what
makes a tale endure the ages, but really just to read more
books. Her very favorite stories—both to read and write—are
those that celebrate the happily-ever-after.

An avid gardener and armchair archaeologist, she grew up
in northeast Ohio but now lives in Indiana with her college
sweetheart husband and two very joyful little dogs.